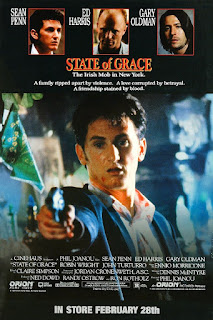 In its relatively short life as a mid-major, Orion Pictures took home an impressive number of prestigious nominations and awards, including four Best Picture wins.  Today, the studio is most remembered for those successes and for its highly-publicized bankruptcy and eventual dissolution, which coincided with the back-to-back triumphs of Dances with Wolves and The Silence of the Lambs. When I think of Orion, however, it's not really for its most acclaimed titles, it's for its remarkably consistent run of intelligent and adventurous mid-budgeted pictures from the late '70s (when it was partnered with Warner Bros.) through the early '90s.


Phil Joanou's State of Grace comes at the end of this era and is, in fact, one of those highly unprofitable pictures that led to its parent company's demise.  A mob picture in a year full of high profile examples of the genre--Goodfellas, Godfather: Part III, Miller's Crossing--State of Grace was quickly in and out of theaters and out of the public consciousness.  I caught it a few years later on VHS, as a teenager, when I was making my way through the Sean Penn filmography (the film has the distinction of being Penn's final movie before his first retirement from acting) and then, again, a few years after that when a good friend of mine really sold me on its virtues. After this second introduction to the film, it became a favorite of mine due to its impressive cast and magnetic performances, very quotable dialogue, haunting Morricone score, and its pervasive gloominess and lack of sentimentality.  The latter qualities struck me as out-of-fashion then and, as Joanou notes on the fascinating commentary track on Twilight Time's new Blu-ray, time has only accentuated them.


The kind of mid-budget drama that has very rarely been made by the studios post-'90s, a loss that Joanou laments on the aforementioned track, State of Grace is also an homage to the gritty 1970s cinema that so inspired Penn and Joanou.  To the film's credit, this was several years prior to the '70s revival when these sorts of tributes became de rigueur and stale.  Finally, as also discussed by Joanou and commentary moderator Nick Redman, in the 25 years since the film's initial release, New York City has become a drastically different place than when the film was shot there in 1989; like so many other films, the passage of time has made State of Grace an invaluable document of the place and time in which it was created.


Made just a few years before citywide clean-up and redevelopment efforts would really take shape, the film shows the city, midtown and downtown Manhattan in particular, when large swaths of it remained as they were in the "Wild West"-like 70s, some combination of unsafe, dirty, decrepit, underpopulated, and cheap...ripe conditions for a gang like the Westies to prosper. Much of the screenplay by playwright Dennis McIntyre and an uncredited David Rabe is inspired by the Irish gang's exploits in '70s and '80s Hells Kitchen; not so ironically it was federal prosecutor Rudolph Giuliani who would take down the Westie leadership of this era and later, as mayor, spearhead the gentrification and Disneyfication of their former territory.


McIntyre and Rabe's major creation is Penn's Terry Noonan, a native of the Kitchen who has mysteriously returned to his old haunts after many years away, and reconnected with his best friend Jackie Flannery (Gary Oldman), Jackie's sister and Terry's childhood girlfriend Kate (Robin Wright), and their brother and boss of the gang, Frankie (Ed Harris).  Noonan's reunion with the Flannerys coincides with Frankie's efforts to align his gang with Italian mobster Borelli (the one-of-a-kind Joe Viterelli playing a character possibly based on Gambino boss Paul Castellano).  As the crazed Jackie, Oldman delivers an electrifying, scenery-chewing performance that ensures that the picture never really lacks energy; Penn has done that kind of thing before, but here he is the straight man, letting his face and body language communicate his character's inner torment.  And, the chemistry between he and his future wife Wright is palpable and she matches the heavyweights around her...it had to be something of a revelation in 1990 when her only previous exposure had been on Santa Barbara and as Princess Buttercup.  I don't know if Harris has ever been scarier than he is here, thoroughly convincing when playing the authoritative boss of his gang and humorously child-like when in the presence of Viterelli.


The supporting cast includes a young John C. Reilly (cast on Penn's recommendation, following their work together in De Palma's Casualties of War), the ice cold R.D. Call (another frequent Penn collaborator--At Close Range, Colors, and several others), John Turturro, an uncredited James Russo, Marco St. John, Thomas G. Waites, and the great Burgess Meredith in one of his final roles (he has a brief, but heartbreaking scene, the casting of which Joanou beautifully recalls on the commentary track).  The movie, like so many other well-known gangster films is a modern Greek tragedy, and on this most recent viewing, I found it as powerful and mournful--with some darkly humorous moments sprinkled in the earlier parts of the film--as I always have; I did feel this time around, though, that it could have been trimmed a bit. That minor criticism aside, I maintain that the film is one of the most underrated films of the '90s and undeservedly unsung gangster films of any era.


With the aforementioned Morricone, Rabe, and cast, as well as cinematographer Jordan Cronenweth, editor Claire Simpson, and production designer Patrizia von Brandenstein, the young Joanou truly had a Murderer's Row of creative collaborators on this show and, unsurprisingly, it is a handsome production in all aspects.  This is to say that the new Twilight Time Blu-ray is a very worthwhile upgrade from the old DVD, with the HD presentation more faithfully representing Cronenweth's intricate lighting, von Brandenstein's carefully designed sets and, of course, the "dirty old New York" practical locations.  We also get a booklet with Julie Kirgo essay and Morricone's memorable (and also underrated) score on an isolated track. Morricone wrote more music for the film than appears in the final cut; I'm not sure if the isolated track includes all of this, so I will hang onto my long out-of-print CD.


Finally, to get back to where I started here, with Orion Pictures, it should be noted that State of Grace represents the final film in a long-running and very fruitful relationship that Sean Penn had with the studio, a relationship that led to The Falcon and the Snowman, At Close Range (coming soon from Twilight Time!), and Colors. Quite an exemplary grouping, I think.

A fantastic film.One of the best gangster movies ever.I love that final scene with the shootout crossed with the St Patricks Day Parade.