After 20 years, what Detective-Sergeant Johnson has seen and done is destroying him. 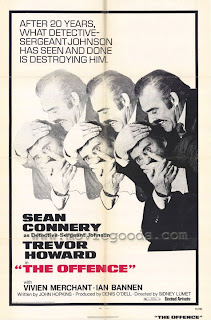 It may seem like a stretch to label a film starring Sean Connery and directed by Sidney Lumet as "obscure," however both men have lent their names to so many productions over their long careers that some films are bound to slip through the cracks.  The Offence is one of those films.  It was the third of four collaborations between the star and director and was produced and distributed by United Artists as part of a unique deal between Connery and the studio.  In exchange for his agreeing to reprise the role of James Bond in Diamonds Are Forever, the studio promised to produce two films of his choosing, provided their budgets came in under $2 million each.  The Offence was the first of these films and it was reportedly made in just one month with a budget of $1 million.  This would seem to have boded well for Connery's enterprise, but the next planned film, Macbeth, was scuttled, in part, because Roman Polanski produced his own version of the play, but mostly due to the poor box office performance of The Offence.

Even though Lumet is working on foreign turf here--which explains the English spelling of the film's title--the universal cop milieu within which the film takes place is one that the director has returned to throughout his career.  Based on John Hopkins' 1968 play This Story of Yours, The Offence's stage origins are quite evident in that the story is mostly confined to three interiors in which three key dialogues play out between the main players.  The narrative concerns the unraveling of Detective-Sergeant Johnson (Connery) during the investigation of a serial child molestation case in the unnamed English town where he serves. The collective memories of rapes, murders, and other savage crimes that Johnson has accumulated after twenty years on the force are "destroying him," as the movie's apt tagline puts it, and his current case has driven him over the edge.  He repeatedly expresses moral outrage at these types of crimes, more so, it seems, than anyone else, and he chafes at department policies. Johnson reaches a boiling point when he interrogates a suspect (Ian Bannen) against orders and becomes so enraged that he beats the man to death. 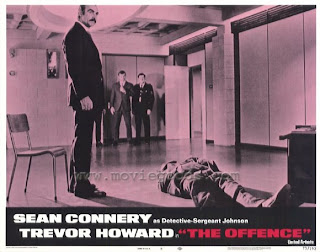 The film begins by showing the brutal aftermath of this scene and then flashes back to the events leading up to it.  Lumet and his editor John Victor Smith adroitly handle the unveiling, if you will, of the film's central moment, the interrogation.  They return to the interrogation several times over the of the course of the film, each time showing a little bit more of the scene, eventually revealing the true climax of the film, which occurs just before the death of the suspect.  Otherwise, the film proceeds in a linear fashion and includes two other key scenes between Johnson and his wife (Vivien Merchant) and another with his superior, Lieutenant Cartwright (Trevor Howard).
While the aforementioned scenes are pivotal to the film, the police procedural scenes at the beginning are more interesting and, on subsequent viewings, quite revealing.  There is a chilling moment in which we see, in long shot and from the perspective of an elderly woman, the meeting of the molester (identifiable only by a dark coat) and his next victim in an isolated field.  The old woman does not intervene.  Soon after, when Johnson discovers the semi-conscious, semi-clothed female victim in a wooded area, Lumet leaves them alone for several uncomfortable moments, creating a sense of doubt about the motives and intentions of Johnson.  Later, when Johnson unwisely tries to interrogate the victim in the hospital, she falls into hysterics at the sight of him.  I'm not sure how these moments played out on stage, or if they were even a part of the original production.  In any event, the procedural section of the film resonated with me more than the powerhouse theatrics that populate the better part of the film.
Lumet has always been able to coax superb performances from his actors and this film is no exception.  The players are uniformly excellent, with top honors going to Connery and Bannen. Bannen has the tricky task of humanizing Kenneth Baxter, a despicable character, and one that could very easily lapse into caricature if placed in the wrong hands. 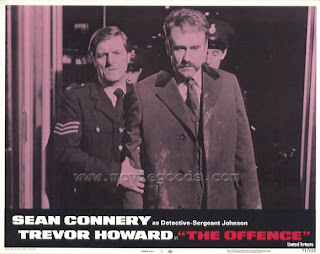 After Superman, Christopher Reeve wisely sought out Connery for advice on how to avoid typecasting.  Connery's reply to the younger actor, "First you have to be good." Connery is much better than "good" in The Offence.  The film may not have shattered box office records, but it was as strong a statement as any that Sean Connery was more than James Bond.  In The Offence he practically smashes his Bond image.  Connery is perfect as the gruff and hard-headed police lifer who is coming apart at the seams.  Of course, these traits didn't stop other movie cops of the era such as Dirty Harry and Popeye Doyle from achieving great popularity. But, Johnson is different.  Just how different is something the film reveals in carefully modulated increments.  He reminds one of Robert Ryan's city cop Jim Wilson in Nicholas Ray's On Dangerous Ground, a man who is unable to emotionally detach himself from the rigors of his job until he finds spiritual peace and love with Ida Lupino in the country. But, where Ryan has Lupino, Johnson has a loveless marriage and his demons only consume him more.  A large part of what makes Connery's performance so impressive is the fact that it is so patently anti-box office, that it goes against the expectations of the audience, and is everything a movie star shouldn't do. This is a dark and ugly character, to be sure, but the journey into his psyche is as fascinating as it is disturbing.
The Offence has been showing up on the Encore networks lately, where I saw it, and it is available on a no-frills Region 2 DVD from MGM.  Unfortunately, there is as of yet no DVD of the film available in the U.S.
This sequence shows Johnson plagued by flashbacks of gruesome crime scenes as he drives home from the station.  It's a good example of the subjective editing used to illustrate Johnson's innermost thoughts and, again, I'm curious as to how these character details were meted out in the stage play:
Posted by Ned Merrill at 5:48 PM 2 comments: