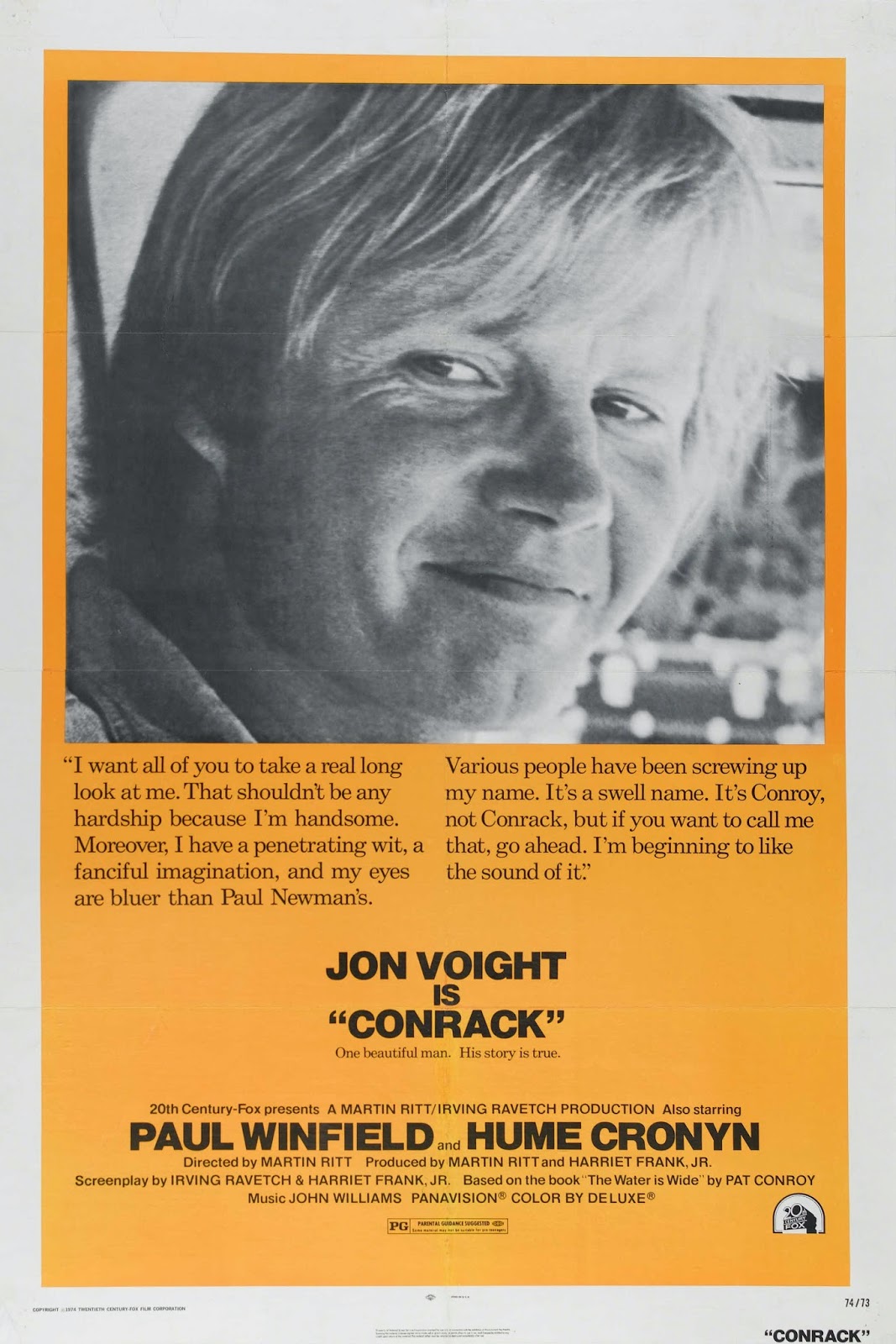 Since his hard turn to the right, Jon Voight has characterized his role in anti-Vietnam War protests and other progressive political movements of the '60s and '70s as youthful indiscretions, the result of "Marxist propaganda." One hopes he doesn't feel that way about Martin Ritt's fine 1974 drama Conrack, in which Voight gives what I consider his greatest performance--and in which his character is accused of being a Communist, amongst other "dirty" things, by hardliner Hume Cronyn.  This is one of a few films that I've really enjoyed recently, including Ritt's Norma Rae, which feature an outsider who briefly enters a community and shakes things up for the overall good.  It's also the rare film to explore Gullah people and culture. 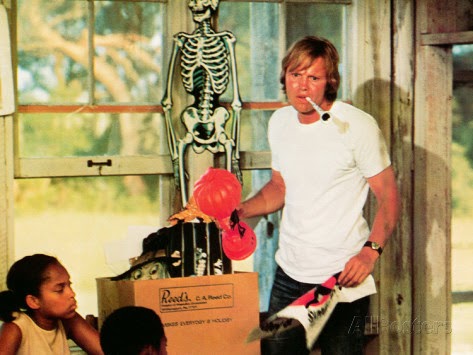 In the prime of his acting career, Voight was a champion of underdogs, anti-establishment figures, the poor, and other assorted societal rejects.  Voight's role as Pat "Conrack" Conroy fits right in with this tradition.  He's an idealistic, young teacher who comes to "Yamacraw Island," a fictionalized Sea Island, off the coast of South Carolina, to teach the impoverished, largely illiterate Black schoolchildren there. Voight's unorthdox, but ultimately effective methods draw the ire of principal Madge Sinclair and Beaufort schools superintendent Cronyn; Cronyn is a good foil as the old timer who dishes out his intolerance and hatred with smiles and Southern hospitality.  Conrack leaves his mark on the children before he goes, but the filmmakers do not pretend that his good work will lead to drastically better lives for them.  We know from the start his time on the island will be short, but Ritt and his frequent co-scenarists Harriet Frank Jr. and Irving Ravetch, who adapted Conroy's memoir The Water is Wide, avoid predicability and false sentimentality. Conrack is at its heart a progressive, anti-establishment (that adjective again) picture, the kind that was in full bloom in the early '70s; Voight was one of the leading faces of these films that gave voice to the disenfranchised and youthfully rebellious, and which advocated for change in the social and political hierarchies. 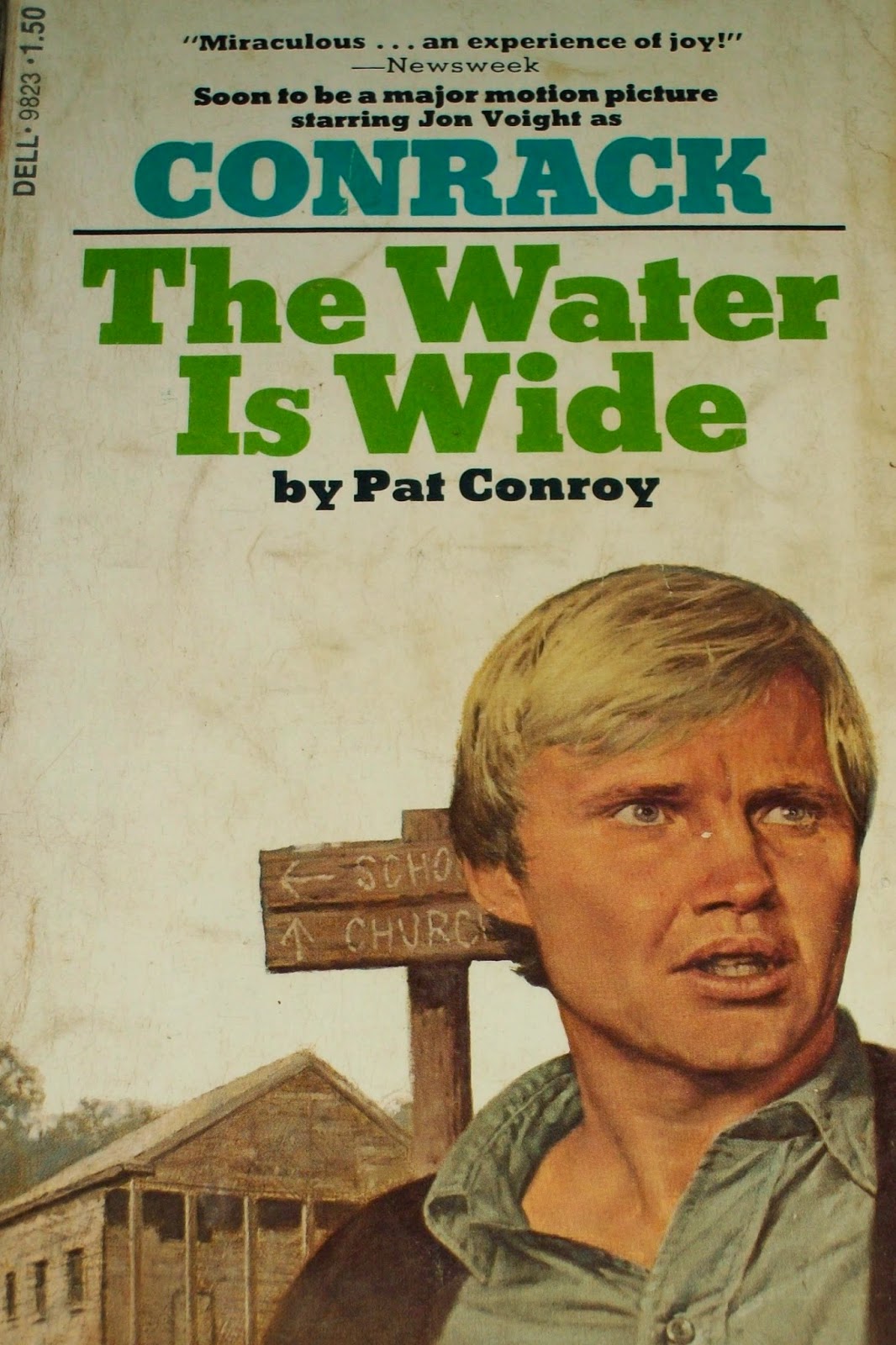 Conrack has many inspiring "teaching moments," scenes that could verge into hokum--Conrack teaches the kids to swim, Conrack takes the kids trick or treating, etc.--but it remains rooted in reality and is distinct from the uplifting Rocky and the many "feel good" movies that would follow in the latter part of the decade and into the '80s; these later films films often shed the realism and political content of films like Conrack and Norma Rae, gradually displacing the liberal outrage of the earlier pictures with some combination of patriotism, apoliticism, or conservatism.  It's difficult not to think of Voight's own personal political trajectory in this instance.  Still, I resist this irresistible impulse and think of Voight as the perpetually smiling, energetic, and often mischievous "longhair" who enthusiastically and passionately teaches his kids, trying any and all methods to reach them, eventually opening their eyes a little bit to the world outside their isolated existence.  Pauline Kael's quote about Voight (reprinted on the back cover of the Blu-ray), says it best: "...just about the lustiest, most joyful presence in current films."  As Conrack, Voight is an absolute joy to behold. 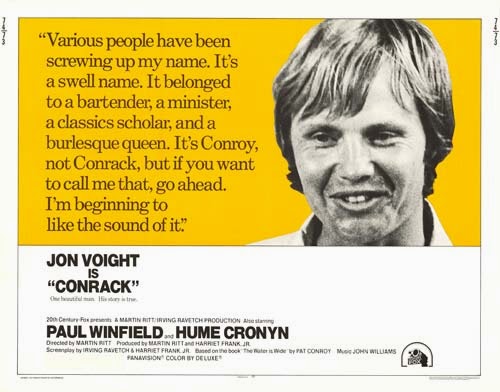 Twilight Time's limited edition Blu-ray--the film has surprisingly and sadly completely bypassed the DVD format--superbly reproduces John Alonzo's scope cinematography (which nicely showcases the rarely-filmed Lowcountry) and John Williams' score (which is beautifully spare, though still unmistakably "Williams-esque"). Twilight Time's reps have indicated that the film has not been one of its biggest sellers, which is not surprising given its status as a drama from 1974 about a teacher.  Yet, it's still disappointing because Conrack is an extremely satisfying, full-bodied portrait of a true iconoclast and I don't think there can ever be too many such characters or stories. Lovers of early '70s American cinema, in which oddball characters and environments flourished like they did at no other time on film, should find themselves quite at home with Conrack.

Here's a small sample of Williams' music, appropriately quiet and mysterious and then rollicking and joyous, all of which can be heard on Twilight Time's isolated score and effects track.  The guitar solos are by famed Wrecking Crew player Tommy Tedesco: