Lost in the Lost 40 Minutes 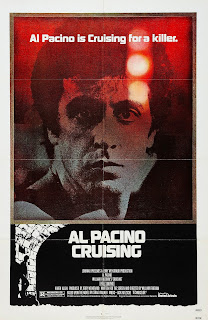 As the credits of William Friedkin's Cruising roll, you'll see the names of James Hayden and Ray Vitte, but you won't see them in the actual picture.  That's because Hayden, tantalizingly credited as "Cockpit Coke Man," and Vitte, whose name appears in a block of performers with no assigned character names, appear to have been removed entirely from the final cut of the film.  I suspect that both actors were part of the fabled 40 minutes that Friedkin excised from the film prior to its initial theatrical release by UA and Lorimar in February 1980.  Sometime between then and Warner Bros.' purchase of Lorimar's holdings in 1989, those 40 minutes were discarded and seemingly lost forever.  This is doubly tragic because not only does it deprive fans of the film of even more Cruising, but it deprives audiences of additional performances from Hayden and Vitte, two promising young actors whose lives and careers were cut way too short.  I haven't seen James Franco and Travis Mathews' Interior. Leather Bar., a re-imagining of the missing 40 minutes, but I'd guess that Hayden and Vitte were not on their radar when they undertook their project.  Thirty years ago, though, it would be surprising if an actor in Franco's place wasn't aware of Hayden and Vitte.

I was too young to know of their work when they were alive, but as a teenager in the early to mid-'90s, I discovered Hayden in Once Upon a Time in America and Vitte in films such as Thank God It's Friday, Car Wash, and Up in Smoke.  As these films became favorites of mine, I was drawn to the charismatic, handsome Hayden and Vitte and when I researched these actors, I was saddened to learn that both died extremely young, in 1983, before they were able to build the bodies of work that their talents were worthy of.

When I finally saw Cruising a few years later at Film Forum, I was surprised to see Hayden and Vitte in the credits and figured I'd missed them somewhere in the crowds of hedonistic young men who appear throughout the the film.  After repeated viewings, I confirmed to myself that I hadn't actually missed them somewhere and that they simply weren't in the final (and only available) version of the film.  It was within the next couple or three years that Friedkin began talking about a missing 40 minutes in interviews; there was hope that he'd be able to locate and re-integrate some or all of that footage into a new version of the film for DVD.  As it turns out that, that footage is no longer extant and the filmed record of the "Cockpit Coke Man" and unnamed Ray Vitte character appears to be gone for good.

There is an excellent, in-depth New York magazine profile of Hayden, archived here, that goes into much further detail about the actor's humble beginnings, fast rise, and untimely passing...

In short, Hayden was coming off acclaimed Broadway turns in a revival of Arthur Miller's A View From the Bridge and David Mamet's American Buffalo, supporting Al Pacino, and had a role in the upcoming Sergio Leone gangster epic Once Upon a Time in America, opposite Robert De Niro, when he succumbed to a heroin overdose in the early morning hours of November 8, 1983.  He was a few weeks shy of his 30th birthday.  Bold-faced names at his Queens funeral included co-star and close friend Al Pacino and Mickey Rourke (who dedicated his performance in The Pope of Greenwich Village to Hayden).  Hayden had recently been accepted by his friend Lee Strasberg into the Actor's Studio.  On the young actor's passing, Arvin Brown, who directed him in his two major theatrical roles, characterized him as a "great artist" and "genius," whom he compared to a young Meryl Streep.

Hayden was a Brooklyn boy, whose working-class background would suggest an acting career was unlikely, but after a stint in the army as a 17 year-old in the waning years of Vietnam, he entered the American Academy of Dramatic Arts, supported himself with the usual odd jobs, and eventually ingratiated himself with the company of David Rabe's The Basic Training of Pavlo Hummel starring Pacino.  He was allowed to clean up backstage and cultivated a friendship with Pacino, which likely led to his role in Cruising.*  A few years later, Hayden was starring opposite Pacino and J.J. Johnston in the revival of Mamet's American Buffalo.  Famously loyal to his friends, Pacino would lobby hard for Hayden to get the role of Manny in Scarface, but the Black Irish Hayden was deemed less suited to the role than Steven Bauer.  Hayden, though, quickly got over that setback by landing a key role as a member of De Niro and James Woods' gang in Leone's Once Upon a Time in America.

Hayden doesn't necessarily get any big, "look at me," moments in the Leone film (those belong to the stars, Woods, in particular), but I've always been especially fond of the glee mixed with cold-blooded efficiency that he displays as he surprises Burt Young's rather despicable mafioso, Joe.  It's his chance to step out of the shadow of De Niro and Woods.

But, there was a dark side to Hayden and he struggled for years with a heroin addiction that started when he was a teenager in the Army and which he kept hidden from most.  So it was with sad irony that Hayden would die from an overdose while talking long distance with his wife just hours after receiving standing ovations for his performance as a junkie in American Buffalo.  Hayden had once told a reporter that the greatest tragedy of Vietnam was the widespread drug problems that tormented soldiers brought back with them.  Even though he had been spared a tour in-country himself, the still-impressionable teen apparently picked up a drug habit through his contact with returning servicemen. He spent his remaining years battling this addiction while also trying to help his lifelong best friend kick his own debilitating drug dependency, a battle they both sadly lost.  Hayden didn't live to see the release of Once Upon a Time in America and his death prompts the inevitable "What might have been?" question, as does the death of his Cruising compatriot Vitte.

*Hayden's good friend Jay Acovone would land the pivotal role of Skip Lee in Cruising and famously cry out, "Who is that guy?!" during the infamous interrogation scene.

A fellow New York native, Ray Vitte did most of his professional work in television and film on the other coast, so Cruising stands out in his abbreviated filmography as one of the only films or television episodes he shot in New York.   I would love to know how Vitte came to be in New York for the 1979 production of the film and what his part entailed, and wonder if Mr. Friedkin has any recollection of the up-and-coming actor on Cruising.

A few years prior, he appeared on Broadway in Ron Milner's What the Wine-Sellers By, directed by Michael Schultz (Car Wash), alongside a host of notable black actors of the day.

According to a 1977 Soul Magazine profile, Vitte got his professional start in a play at the Scorpio Rising Theatre in the early '70s, which was followed by several years of solid episodic work and small to medium-sized roles in a number of Hollywood features, including Airport '75, Mother, Juggs, & Speed, Nine to Five, A Force of One, Heart Beat, in addition to the aforementioned films.

There is not as much easily accessible information about Vitte's off-camera life and even the questionable circumstances of his death, following a struggle with the LAPD, are frustratingly murky and incomplete.  On February 20, 1983, after what was described as some kind of mental breakdown in his Studio City home, in which Vitte was heard loudly ranting and "religious shouting" for some 12 hours, police officers were called to the residence by neighbors.  In the process of being apprehended by the police and after a physical altercation, the unarmed Vitte died, a death officially attributed to "liver degeneration as well as heart failure."  The Vitte family and attorney Johnny Cochran brought forth a lawsuit disputing that official story, but I don't the know the particulars of the case or what kind of resolution there was, if any.  Vitte had spent time in the hospital earlier that month with a high fever, which may have contributed to his mental state on the day he died, but he had no drugs in his system at the time of death, and friends, including Donna Summer, and family attested to the fact that he was not a drug user.  There was a struggle with police, but authorities described his injuries from the fight as "superficial."  It certainly sounds like another well-earned black eye for the LAPD, but, as I said, details are scant.  Times obit and Jet article on Vitte's death.  Vitte was 33.

In the pieces that I've seen Vitte in, he easily essays the part of fun-loving and, sometimes, wild dude, with the good looks, charm, and comic timing to make it look easy.  I'm interested to see more of his dramatic work, which would be represented in his episodic gigs on hour-long dramas such as Harry O, now available via Warner Archive.

As with Hayden, it's natural to wonder what might have been with Vitte, had he lived. We'll never know that answer, but with renewed interest in Friedkin and Cruising, due to his recently-published memoir and Franco's Interior. Leather Bar, perhaps we can at least get a clearer picture of Hayden and Vitte's roles in that lost 40 minutes.