These old promotional campaigns for the opening of Fast Times at Ridgemont High first in Los Angeles, and later in New York, are a blast from the past.  However, some things never change as evidenced by publicity hound Sean Penn's absence from either of the two events. If I'd been old enough and savvy enough to attend, I would have been able to meet two of my twenty favorite actresses--Jennifer Jason Leigh and Phoebe Cates.  I did meet Brian "Mark Ratner" Backer much later on.  But, that's clearly not the same thing... 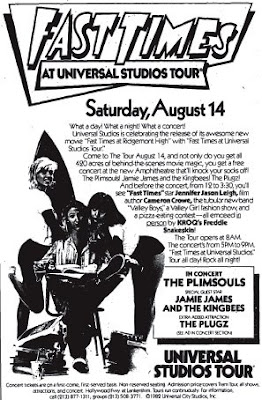 LA: A free concert at Universal Studios with the Plimsouls(!), the Plugz(!), and some bands lost to the ages (Jamie James and the Kingbees & the Valley Boys) + a Valley Girl fashion show (yay) + a pizza-eating contest (um, okay) + writer Cameron Crowe and star Jennifer Jason Leigh 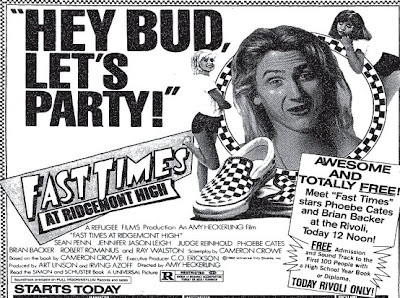 NY: The publicity machine takes advantage of the availability of the film's New York-based stars Phoebe Cates & Brian Backer + gives free soundtrack LPs to the first 100 people who show up with a high school yearbook or diploma (creative)
All in all not a bad effort for a studio that was said to loathe the film.
Posted by Ned Merrill at 3:20 PM

Ah, what I wouldn't have given to meet Jennifer Jason Leigh and Phoebe Cates in person... wow!

At that point, nobody really knew who they were since the film hadn't opened yet.

The Universal Studios idea is pretty cool. I wonder if they did that with any other film premieres.

To me, it's somewhat reminiscent of the last part of the book, by Cameron Crowe, which takes place in Disneyland during the post-graduation "Grad Night" event.

The movie, of course, substitutes the dance scene at the high school probably because filming in Disneyland, or another theme park, would have been more elaborate and cost-prohibitive.