Not So Obscure Trailer, but still MIA on DVD: Carny (1980, Robert Kaylor)

When you're young and going nowhere...the Carny looks like a good way out.

This one showed up in one of those Warner Home Video/Amazon DVD voting promotions, but, alas, it was not selected by the public.  Even though Warner vowed that all titles on the ballot would be released on DVD, Carny still has not appeared on this format. It's an oddball film, to be sure, and seems to have been left over from the '70s.  In another year or so, small films like this were summarily swept out by the likes of Simpson and Bruckheimer.  It's about carnival workers Frankie (Gary Busey, in one of his pre-wack job performances) and Patch (Robbie Robertson, ex-Band member and friend of Scorsese), and the young runaway (Jodie Foster) who comes between them. 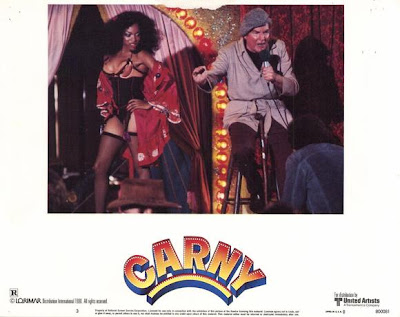 The sublime supporting cast includes the aforementioned Kenneth McMillan, Elisha Cook Jr. (what self-respecting carny movie would not utilize Cook if he were living), Meg Foster (one-time Cagney & Lacey co-star and possessor of the most hauntingly blue eyes), Tim Thomerson (of Trancers fame),  Fred Ward (what else needs to be said?), the much-maligned Craig Wasson, Bill McKinney (the scariest Mountain Man you'll find), and Bert Remsen (who also appeared in Brewster McCloud). 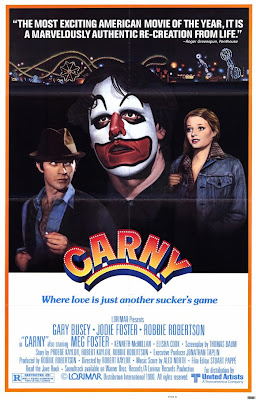 I've always had a fascination with carnival life and carnies (along with truckers) and maybe that's why this film appeals so much to me. Plus, I love films that are set in a milieu we don't often see depicted in the movies.  Director Robert Kaylor previously made a well-received documentary on the roller derby craze titled, appropriately, Derby.  His only subsequent credit is the 1989 Chad Lowe comedy Nobody's Perfect (of course, this one is on DVD).  I haven't seen the latter, but it does not look very promising.  I would hope that the presence of Foster would be enough to release Carny on DVD.  Maybe it'll happen if Busey does something crazier than, say, molesting Jennifer Garner on the red carpet...

I haven't seen it in years but I remember loving this film. One Trick Pony was another one the public didn't vote on. Fingers crossed on both of these...I will be addinga link to this one as well at Moon, thanks for continuing this.

You know I love championing the unsung so I will keep fighting the good fight for the forgotten ones. I've never seen ONE TRICK PONY, but I've always been intrigued due to the cast.

Hi...Some general comments..I have read this blog for a few weeks&it has become one of my favorite film blogs.well done.

Carny I saw YEARS ago & I found it haunting at times.The lead actors defintely Foster&Busey unfortunately would never make a film together again.they had a realistic chemistry.Robbie Robertson plays Robbie Robertson.

Also.."night of the juggler"&"to live &die in l.a." 2 forgotten classics

thanx for the hard work

Thanks for the very complimentary words! Some personal issues have kept me offline for a week or so, but I will be back soon and try to keep up pace.

Haven't seen NIGHT OF THE JUGGLER yet (I had it on my DVR, but it was erased before I could watch it), but I do very much admire TO LIVE AND DIE IN L.A.

Hey friend(s),
Head over to Warner's. They just announced this one along with Don't Be Afraid of the Dark (um yeah) and All the Marbles!

I'm a fan of The Band, so bought a VHS copy on Amazon a few years ago to see Robbie Robertson's first acting attempt (not bad, I have to say!) My copy was second-hand and pretty grainy, so would love the DVD. I notice that Amazon in the USA now have this as a DVD that is burned on demand. I'm in the UK and Carny doesn't feature on our Amazon site - I may have to fork out to get it shipped from the USA.

Great to see your review of this forgotten gem!

ONE TRICK PONY is really terrific--unsung, to be sure. And so is CARNY! Great Alex North score, supporting cast that includes Elisha Cook, Meg Foster, and scads of other character actors, eerie photography, and a musical interlude (and shower scene) from The Fat Man, which has to be seen to be believed. I have a poster for this title, too, but it's different from the one you show--it's Busey in clown makeup (WHAT A PERFORMANCE!), Foster in her sexy dance get-up, and Robertson with a cig dangling from his lips, all posing with arms around each other, with the carny in the bg. RELEASE THIS ALREADY!

CARNY is available now, with a good widescreen transfer, via the Warner Archive. I know the poster you speak of--great alternate artwork, indeed. I've the got the soundtrack LP, which is a good mix of Alex North and Robbie Robertson originals, IIRC.

ONE TRICK PONY is also available via the Warner Archive.