Not So Obscure New German Cinema Trailer, But MIA on Region 1 DVD: Knife in the Head/Messer Im Kopf (1978, Reinhard Hauff) 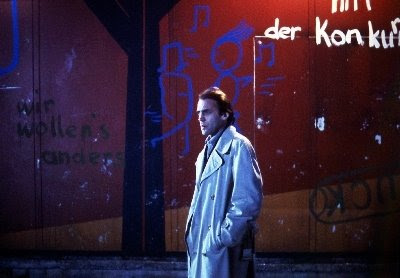 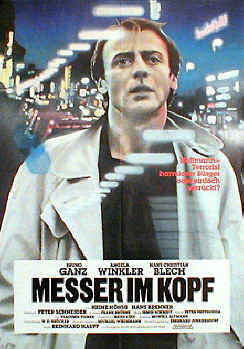 One of the best films to come out of the New German Cinema, Reinhard Hauff's Messer Im Kopf, known in the U.S. as Knife in the Head, has not achieved the same level of international recognition as those of Herzog, Wenders, Fassbinder, Schlondorff, and von Trotta. In many ways it is a gender reversal of Schlondorff's The Lost Honour of Katharina Blum.  Schlondorff and Hauff share similar concerns towards political and social commentary and, accordingly, they were partners in their own film company, Bioskop.  In Knife in the Head, Bruno Ganz stars as Hoffmann a research scientist who, one evening, goes off in a huff to the headquarters of a radical group to confront his estranged wife.  When he gets to the center it is being besieged by riot police.  The agitated Hoffmann enters the fray anyway and, in a moment that we do not see, he is injured and left comatose. 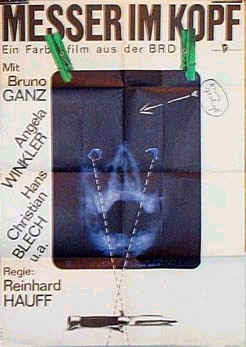 The remainder of the film finds Hoffmann awakening and learning to function and think all over again.  He has cloudy memories of the incident and finds himself at the center of a struggle between the leftist radicals and fascist-like police.  Ganz is a marvel in the role and he truly is one of the finest actors in any language. Here, he must display the full range of emotions as he goes through the process of regaining his faculties while resisting the efforts of others to make him into a pawn for their own causes.  Angela Winkler (star of Katharina Blum and The Tin Drum) provides good support as Hoffmann's wife.  The great, sinister electronic score is by Can keyboardist Irmin Schmidt. 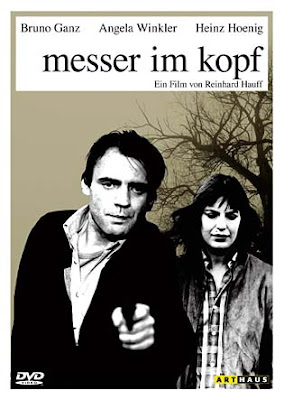 There is a German-language DVD of Knife in the Head, but it appears to be minus English subtitles, or any subtitles of any kind.  So those who wish they could understand Deutsch, but do not, are out of luck. New Yorker Films distributed the film in the U.S. along with several other Hauff titles, but only Knife in the Head appeared on video in the U.S.
Here's a trailer for the German speakers:
Posted by Ned Merrill at 6:23 PM

I gotta see this Ganz one. It sounds really good, and there's nothing like the New German Cinema era...I've got to revisit some more of those.

I'm always surprised at how many films Ganz has been in. Have you ever seen a film called "In the White City" By Alain Tanner? It's another pretty obscure one with Ganz I happened to see recently. Thoughtful little film. Very meditative and understated.

Thanks for visiting. Yes, I have seen IN THE WHITE CITY. It's one of my favorite films--along with KNIFE IN THE HEAD, it's my favorite Ganz film. We need more Tanner on DVD here in the States, as well.

where can i get knife in the head? new german is one of my big obsessions and this one has eluded me for far too long. can't get enough ganz in my diet.

You can find VHS copies on the secondary market. It was released by New Yorker Home Video on VHS in the '90s, but it's OOP. The only DVD I've been able to locate is the one I mention in the article, but it's only useful if you're a German speaker.

Hey Ned,
just bumped into your blog searching for some information on New German Cinema. The movie I'm particularly interested in is the one I saw on TV some twenty years ago and the title was translated as The Lighthouse (at least in my language, which is Serbo-Croatian btw). It is about a guy serving a long sentence who is offered a post at a lighthouse instead of going to prison. Any idea which movie is that? I've been trying to find any information on the web for the last couple of years with no success. Thanks.

Knife in the Head is a stunning piece of film-making from almost every vantage point. It got a well-deserved rave from Vincent Canby in the NY Times, and I can't understand why it was never more popular in North America. A few years ago, I rented a print to show at a film series in Vancouver, and it was well-worn. It's such a shame that it's not available on DVD with English subtitles. We should lobby Criterion to pick it up...

I'd agree, of course, that KNIFE IN THE HEAD is sadly under-appreciated in this country. Where did the print you rented come from? New Yorker was rights hold in the States, but I don't know where that stands at this point, since they briefly went of out of business and recently re-opened. I know that the Goethe Institute rents out a 16mm print. How was the film received, regardless of print condition, when you screened it?

I've posted a detailed review of this overlooked gem online in "Senses of Cinema".