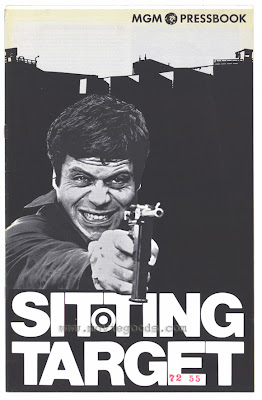 After watching Douglas Hickox' Sitting Target, it's easy to see why Quentin Tarantino named a character after the late director in his Inglourious Basterds. Tarantino also talks about the film with Edgar Wright on their rollicking Hot Fuzz commentary. The hard-charging Sitting Target is one of the great British crime films and stands tall against other moody, early '70s genre cinema, whatever nationality. Screenwriter Alexander Jacobs, he of the great Point Blank, as well as French Connection II, The Seven-Ups, and Hell in the Pacific, adapted Laurence Henderson's novel of the same name. From the very first strains of Stanley Myers' propulsive, ominous score set to images of a determined Oliver Reed doing an intense exercise routine in his jail cell, I knew I was in for a treat. 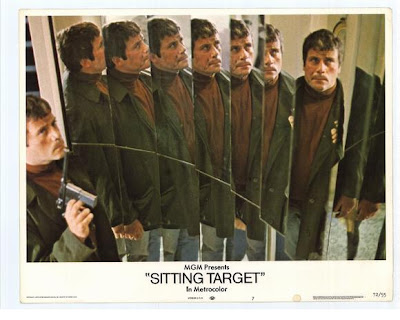 Reed plays career criminal Harry Lomart who finds out soon into his latest incarceration that his beloved wife Pat (Jill St. John, trying on a not entirely successful British accent) isn't going to wait for him when his 15-year jail spell ends. Adding insult to injury she tells him that she has met someone else and wants a divorce. When he hears this, in a show of raw power and rage, Harry somehow gets his hand through the partition separating them and attempts to strangle his wife to death. Prison guards separate Harry from his wife before he can finish the deed, but the stage is set for a daring escape so that Harry can exact his revenge. However, to its credit, the film doesn't play out exactly as one would expect and it has quite a few surprises up its sleeve right up until the final reel. 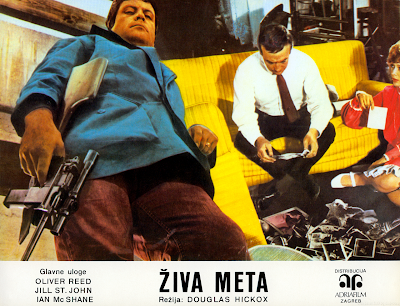 This is a nasty ride with nary a sympathetic character in sight. Hickox keeps the film moving at a good, energetic pace throughout the film's 93 minutes, fitting in an exciting, tension-filled prison escape, a chase involving motorcycle cops and hanging laundry that defies description, and an emotional finale with a twist that leaves things on an appropriately somber note. Reed's legendary strength and brutish qualities are put to good use here and he turns in a great performance as the emotionally broken Harry. He's joined by a young Ian McShane as his partner in crime, Edward Woodward as the cop hunting them down, Frank Finlay as a duplicitous former associate, and Freddie Jones as a fellow prison escapee.
This is an MGM title and, since it is pre-1986, belongs to Warner Bros. Expect a Warner Archive disc at some point.

Great artwork/photos on those LC's and posters! Really excited to see this!

This sounds like a really cool crime film. I've always liked Oliver Reed. He was very effective in Cronenberg's THE BROOD.

I will have to track this one down. Thanks for the heads up!

J.D. & Rupert- Good to hear from you both. I'm quite confident you will not be disappointed. Much as I dislike the Alamo Drafthouse's name for this sort of thing, it is truly "Bad Ass Cinema."

Been trying to find this film for months. It's of particular interest to me as I live near to the Winstanley Estate in Battersea wher some of it was shot.

The only torrent I could download has only given me 82% of the film. Any leads much appreciated!

I really would love to see this one. It sounds awesome. Plus I'm a big fan of Oliver Reed.

Unfortunately, I don't know how to help you. I saw the film at a screening in NY at Anthology Film Archives curated by William Lustig. It was a 16mm print as the Anthology programmers were unable to locate a 35mm print. I do think that Warner Bros. will put this out via the Warner Archive eventually.

Oliver Reed is tremendous in the film--one of his best performances. I think you will enjoy.

Ian McShane is immence in this film. The soundtrack is excellent as well and was reissued by finders keepers.

It shows up on TCM quite a bit.