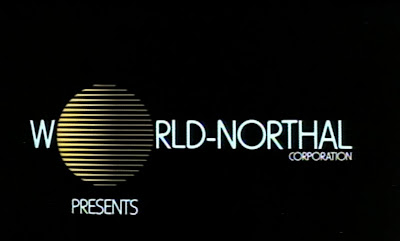 Two frames from the World Northal logo taken from the front of Rhino's Quadrophenia DVD. World Northal began as a competitor to outfits like New Yorker, disributing art films such as Cousin, Cousine and The Last Wave. When subsequent foreign films didn't perform well, World Northal moved into lucrative deals with exploitation distributors such as Raymond Chow's Golden Harvest and thereafter specialized mostly in martial arts titles. This burgeoning catalog morphed into the popular "Drive-In Movie" package of films sold to syndicated television throughout the 1980s. Chris Poggiali has written a fascinating and exhaustive article covering this entire history.

Love that old Warners logo. It was nice to see it at the beginning of the SUPERMAN film which tipped you off that it was going to be more in the vein of the first two Chris Reeves films.

Hmmm...did they use a similar logo at the front of SUPERMAN RETURNS? I only saw it once, didn't like it, and don't recall the logo. The logo I posted here is from the 1978 film.

Whoops. My mistake. I don't think they did. I'm getting my SUPERMAN films mixed up. Perhaps wishful thinking. ; )

It can happen to the best of us! It will only get more confusing when Warner Bros. reboots the SUPERMAN franchise one more time in the next couple years!