Just watched two Richard Fleischer films this week, The Narrow Margin and The Don is Dead. The former is a model of efficiency, a taut, tough noir. The latter is an interesting, if somewhat by the numbers, mafia film made to capitalize on the success of The Godfather. 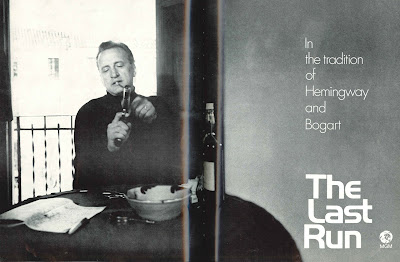 I love this promo artwork for The Last Run and would like to track the film down. It's never been released on home video, but has apparently appeared letterboxed on TCM. The script is by Alan Sharp who wrote 3 of the era's best scripts: The Hired Hand, Ulzana's Raid, and Night Moves before trying his hand at directing once with 1985's Little Treasure, remembered mostly for the ugly episode in which Burt Lancaster and co-star Margot Kidder got into a dust-up on set.
The Last Run has its own messy production history in that original director John Huston left the project in a huff after repeated fights with star Scott. Gun-for-hire Fleischer was quickly called upon to finish the deed. In the meantime, French star Tina Aumont also left the film after a row with Scott and was replaced with the actress who would become his third wife, Trish Van Devere. Also, in the film was Scott's second wife Colleen Dewhurst. Making lots of friends, this Scott... 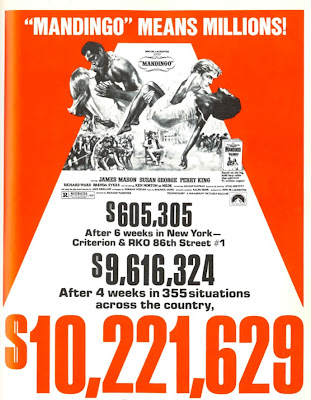 Mandingo is finally easy to track down on home video after Legend Films licensed it from Paramount and released it on DVD a couple years back. I still haven't caught up with this one-time cause celebre, but where the film was mostly critically reviled upon release, the DVD release brought out some staunch defenders including Dave Kehr who called it "Fleischer's last great crime film."
Posted by Ned Merrill at 11:08 AM