"The only adult she admires is Johnny Rotten." 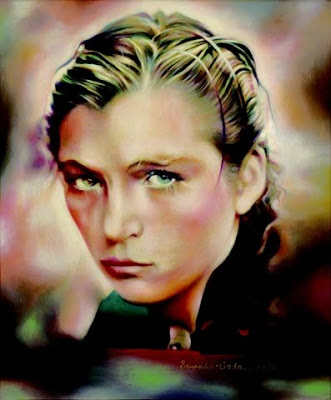 The Film Society of Lincoln Center has some pretty special screenings planned this summer and I'm particularly excited about the Dennis Hopper tribute coming up, which includes the rare double bill of American Dreamer, the doc on Hopper directed by L.M. Kit Carson & Lawrence Schiller, and Hopper's own Out of the Blue starring Hopper and the inimitable Linda Manz.
Perhaps the best part about these screenings will be the in-person appearances by Carson, Schiller, and Manz. Personally, I viewed The Wanderers and Out of the Blue many times in my teens and early 20s and am really looking forward to hearing Manz speak about her experiences making such exceptional films in so short a period of time. Her other major starring role in this period was, of course, Days of Heaven--quite an impressive troika for a career let alone three years. She's been out of the spotlight since making a mini-comeback in the late '90s with Gummo (not a favorite of mine) and The Game. Out of the Blue is easily her most fully-realized and most searing performance. It's a tough, angry, and dark film that's not for the faint of heart and Manz goes to all those very dark places as CeBe, a teenage girl whose tragic circumstances have built up more pain and rage inside her than any person should have to withstand.
Apparently, she made a few extra bucks during the filming of Gummo by selling her Elvis jacket from Out of the Blue to Chloe Sevigny. I wonder what happened to her even cooler Baldies jacket from The Wanderers: 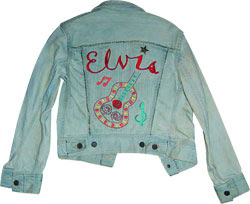 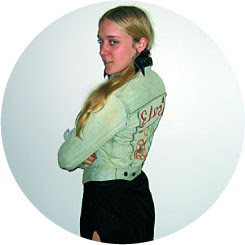 I had this one-sheet on my college bedroom wall for a long time: 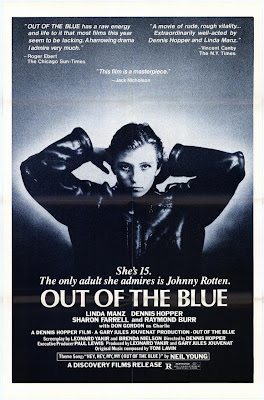 Years later, I was watching a documentary on the Minutemen and one of the interview subjects (Dave Markey) had the poster on his wall in the background.
Posted by Ned Merrill at 8:49 PM

Oh man - I watched Out of the Blue only once, it is permanently etched into my mind and I don't think I can watch it again.

As a Canadian it is my duty to point out that, like Ladies and Gentlemen, the Fabulous Stains, Out of the Blue is shot in Vancouver and other parts of British Columbia AND features an appearance by maybe the best BC (if not Canadian) punk band of all time, the Pointed Sticks!

Phew, that's a lot. At any rate, thanks for the Manz appreciation, Ned!

Yeah, OUT OF THE BLUE is a tough one, for sure. Makes the STAINS look like a Saturday morning cartoon. Both shot in Canada, indeed. Love me some Canucksploitation! Thanks for the tip on Pointed Sticks (the punk scenes in OUT OF THE BLUE have an authenticity missing in most other cinematic portrayals of the scene) and Prince Language.

I love the Primal Scream song "Kill All Hippies" that samples some of Manz's memorable dialogue from OUT OF THE BLUE.

Man, I would love to see her speak in person - she has such a fascinating on-screen presence and, as you point out, the films she's done have been eclectic to say the least. I remember when I first saw THE GAME and was shocked by her small role in it. I wonder how the hell Fincher convinced her to be in it?

Manz' appearance may have had something to do with Sean Penn being in THE GAME as he is an acknowledged admirer of OUT OF THE BLUE since he first saw it during one of Coppola's late-night screenings on the set of RUMBLE FISH (Sean was visiting brother Chris). IIRC, this was where Penn met Hopper. A few years later, Penn was instrumental in having Hopper direct COLORS, which was co-produced by OotB producer (and Hopper pal) Paul Lewis.

Haven't heard that Primal Scream song. I will download...

Sorry to beleaguer the Canadian-connection, but I'm fairly sure that there's a scene--again, I've only seen this film once--where Manz flirts with the drummer of the Pointed Sticks who I believe at this time was Chuck Biscuits, who also played with Black Flag, D.O.A, and Danzig, among others. Might be a good Q&A material...

I didn't realize Manz was in The Game though! It always seems to be on cable, but I never catch it front to back.

Interesting that the comments here, besides mine, come from Canadians...

WOW...I so wish I could be at this and that shot of Chloe in that jacket has just made my day!

Glad you dug that photo of Chloe, Jeremy. It came from the Vice Magazine website.

Oh wow, I had no idea about the Manz-Penn connection! Small world indeed.