Trailer Not on the DVD: Saturday Night Fever (1977, John Badham) 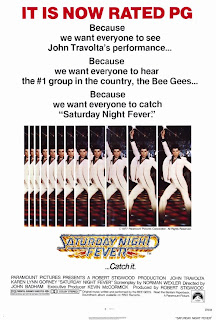 Paramount has been pretty bad about putting original theatrical trailers on their DVD and Blu-ray releases.  I've heard that music in trailers also needs to be cleared for home video and this may be why so many vintage Paramount trailers remain absent from DVD.  Still, I find it doubtful that all the other studios are clearing music rights for the original trailers on their disc.  An interesting example of this sort of thing is the Last American Virgin DVD, which is missing Human League's "Love Action" (replaced by another go round of "Whip It") because the band refused to re-license it for the film.  However, the DVD also contains the original theatrical trailer, which includes a portion of "Love Action."  I'm guessing no one was paying too much attention to the content of the trailer.

This trailer, which probably came from an old VHS, runs fairly long and has a promo for the soundtrack album at the tail end.