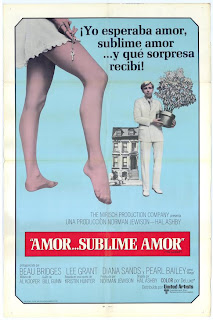 For a film location enthusiast (read: nerd) like myself, living in a metropolis such as New York means I am often thrilled by the simple fact of seeing a familiar location on screen.  It's especially enlightening when said film is from a past era and when, by viewing that film, one can get a sense of how much or how little a particular spot has changed in the intervening years.

Take Hal Ashby's The Landlord, for instance, filmed primarily in a pre-gentrified, very different Park Slope, Brooklyn.  In the 40+ years since the film was made, it's gone from a low-income, African-American neighborhood to a wealthy, stroller and health food store-laden enclave.  One of the major visual differences--aside from the dilapidated condition of the buildings--which is easily spotted when watching the film is the lack of trees in 1970 Park Slope as compared to now.  The impact of a tree-lined block versus a barren one is more dramatic than I had realized.  I have lived near Park Slope for many years and spent a lot of time there and it is nearly unrecognizable to me in the film.

All that said, the shot I've got for you here is the from the final moment in the film and takes place outside of Elgar's (Beau Bridges) girlfriend's (Marki Bey) apartment, which is located on the corner of Cranberry and Columbia Heights in picturesque Brooklyn Heights, just across the street from the Brooklyn Heights Promenade.  As much as Park Slope was transformed since The Landlord was made, this intersection appears to have been fairly similar in 1970, at least from this vantage point.  Although, Beau Bridges could no longer half-haphazardly leave his car running on the sidewalk due to the barriers now running the length of the road (probably installed post-9/11). 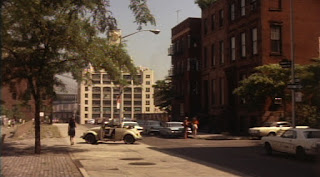 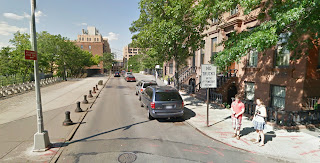