In honor of Mr. Hill's latest theatrical feature, Bullet to the Head, and the recent Blu-ray of Southern Comfort, courtesy of Second Sight.  I had the pleasure of seeing a 35mm print of the film earlier this week accompanied by a post-screening discussion and q & a with the director.

Watching this film for the first time in years the other day, I found myself thinking of my late father and how he would have enjoyed this film, its ambiance, its directness, and the perfectly attuned score by Ry Cooder.  Then I realized that I probably had watched the film, or at least part of it, in the company of Dad, via this laserdisc, which I no longer have, but which got a lot of play in my teen years. 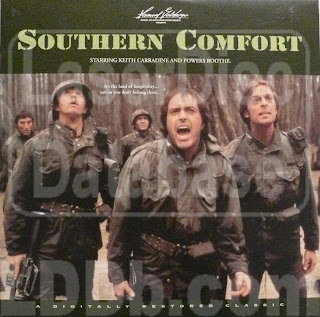 The screening also reminded me how much I like Powers Boothe in this film and pretty much whenever I see him on film or television.  Considering his talents and screen presence, the man did not get enough feature film (sole) lead opportunities in his prime, aside from Boorman's The Emerald Forest, a film I have strong memories of seeing tv spots and prints ads for, but which I never actually watched.  This rekindled admiration for the actor brought me back to my dad, as I suddenly had a memory of him saying something like, "I like that Powers Boothe.  Good actor."  Which brought to me to an even earlier memory (circa 1983) of watching Boothe as Philip Marlowe, with my dad, on the (first) HBO original drama Philip Marlowe, Private Eye.  As I've written here before, anyone who's lost a loved one probably has one or two things they'd like to do with, or say to, that person more than anything else.  The cinephile in me just wants to sit down and watch a "Dad movie"--Southern Comfort will do--with Dad. 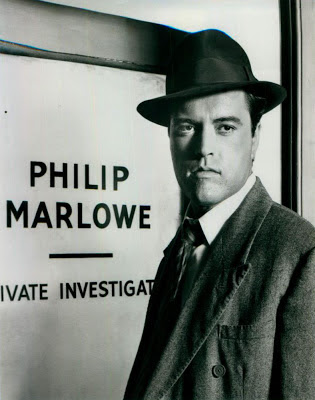 Powers Boothe is a "Dad Actor" if there ever was one - and Walter Hill, especially in Hard Times, Southern Comfort, The Driver - made some great and hard-boiled dad masterpieces. Man i can totally relate to wanting to watch a dad movie with my pop again. I know how you feel. Something very comforting when you'd sit back and enter that grown up world view with them. You were watching the same flick but bringing a whole different bag of experiences with it. And something about the shared nature of watching films, made you - if you could tune into their experiences and the things that made them react in certain ways to the film, then at least, you could vibe with their energy. You were more than sharing 'something' you were granted insight into their 'way of seeing'.

What the hell happens to a guy that makes him want to watch Dad movies? I don't know but it's happening to me. For me, there's something appealing in the stoicism of Dad Film heros that's appealing to me all of a sudden. Maybe it's an identification thing? There's something about knowing that my kid is asleep in the other room. And your presence there somehow protects him, that i think ties into the Dad Movies. i saw Springsteen on a tour talk about the feeling as you watch your sleeping children and you see their belly going up and down and the breath going in and out of their lungs as they sleep. And it's true, they seem so fragile. There's a fragile-ness to children that's hard to describe. In an interview , that same year he talked about how the minute you have kids, you walk hand in hand with a sense of your own mortality from there on out. I don't know if i totally get it, but i think those feelings are part of what attracts us to Dad Movies.

That fragile-ness only seems to make you aware of your own coarseness, your own toughness. No matter how NOT tough you are - you're pretty tough compared to a sleeping 8 year old.

And then, something, makes you want to explore that toughness. Something makes you realize that yeah, maybe you and Lee Marvin and Warren Oates have something in common. The heros of Dad Movies don't talk much, and it addresses your own silence.

There's so much you want to communicate to your kids - about your dreams that didn't quite work out, about your disappointment in yourself, in your marriage, in your wife, in your bad decisions,

You love 'em, you want to share with 'em, but you can't. You want to say, 'my gosh, you've been a light of truth in my life and you made peoples real character emerge, and here's what i've learned'. But you can't possibly do it. You'd break their hearts. You also can't bullshit 'em. So... silence.

Somehow, I've begin to identify with these quiet loners, these guys with the secrets of the world quietly rumbling through their heads - Showing nothing, sharing not much, fiercely protective of their own piece of reality. I find myself engrossed in westerns i would have never watched, and other Dad Movies that would have bored me beyond belief.

I know i shouldn't admit it but there's a resignation to the feeling of responsibility that makes you not want to leave your family, while you know that technically you could actually go off and father others, and love others, but you don't. There's a weird, sad, power in knowing you could father many other children, in other situations, but you chose to stay here - with your broken dreams and disappointments and hurts, because of a sense of responsibility. And somehow, these sad movies (they are all sorta resignedly sad) speak to me now in ways they never did before. I need to take some DHEA. :)

I would love to watch a Dad Movie with my dad again too. And at least be able to tell him i kinda know how he felt. I'm sure somewhere out there they know man.