Trailer Not on the DVD: Homeboy (1988, Michael Seresin)


Before he was The Wrestler, Mickey Rourke was the title character in Homeboy, a little-seen boxing drama from the first part of Rourke's acting career, before he embarked on a sojourn in the real world of professional boxing.  I haven't seen this myself, but I recall eyeing the VHS cover many times in rental shops in the '80s and Moon in the Gutter's Jeremy Richey wrote glowingly of it a few years back.

Aside from having some pretty swell foreign poster designs, which you can see here, Homeboy is noteworthy in that Rourke wrote the script and actually discussed the project, years earlier, with co-star Christopher Walken when the two were working together on Heaven's Gate.  Rourke's then-wife Debra Feuer (seen earlier in To Live and Die in L.A. as Willem Dafoe's girlfriend) has the female lead.  It is the lone directorial effort for Michael Seresin, known primarily as the cinematographer on the majority of Alan Parker's films.  Homeboy is set on the dilapidated boardwalk and streets of Asbury Park, a location Rourke would return to some 20 years later for The Wrestler.  Music is by Eric Clapton and the late Michael Kamen, which the attached trailer crows about (Clapton, not Kamen). Kamen and Clapton would also share credit on the celebrated BBC serial Edge of Darkness and the Lethal Weapon films. 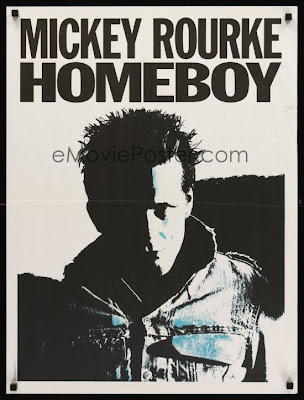 It has come out on DVD, but this trailer, which I suspect is a video trailer, is not on it.  The film was not granted a theatrical release in the U.S., at least not a wide one so far as I can tell, so this may be it as far as U.S. trailers go. 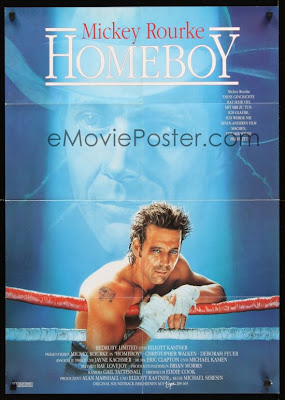 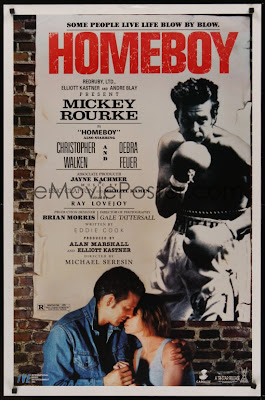 Homeboy was produced by Elliott Kastner, who earlier collaborated with Rourke and Seresin on Angel Heart.  Kastner passed away in 2010 and his name graces many of my favorite films of the '60s, '70s, and '80s, most of them offbeat and unsung to one degree or another. When he died, Bob Cashill recalled a Variety article with a title like "Kastner: 21 Films, 21 Flops," and obituaries noted that he treated both failures and successes with good humor.  Anyway, it seems to me that Kastner's oeuvre is due a little re-appraisal and celebration.
Posted by Ned Merrill at 10:47 PM