In Defense of: Gang of Four's Hard 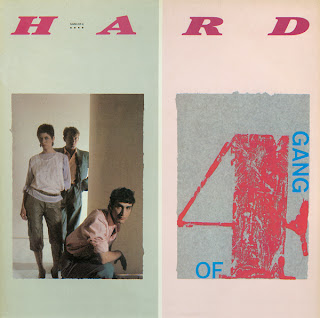 As the (former) title of this blog ("Natural's Not In It") indicates, I am quite a fan of seminal post-punk band Gang of Four.  For the uninitiated, "Natural's Not In It" appears on the band's masterful debut album, Entertainment!. Fast forward five years and three albums later, to 1983 and the band's first swan song, Hard.  Lambasted by critics and fans alike, Hard has gotten a raw deal in my estimation. While I would rank it fourth out of the band's first four albums, I also consider Hard a fine record on its own terms.  In fact, it is not much of a departure from the previous year's Songs of the Free, which featured the band's biggest hit, "I Love a Man in a Uniform," a favorite in dance clubs on both sides of the Atlantic.

Hard suffers in comparison to Gang of Four's earlier output, in particular Entertainment! and Solid Gold. To longtime fans of the band, Hard was and is considered a sell-out.  A band that once refused to write songs about love now released a single entitled "Is It Love." However in the context of the band's progression, particularly on Songs of the Free, the refined dance-pop of Hard is a logical next step.  No doubt feeling pressure to follow-up the surprise success of Songs of the Free, Gang of Four went the way of other post-punk outfits such as Scritti Politti and further tweaked their sound to fit the then-current craze for all things New Wave and synth pop. 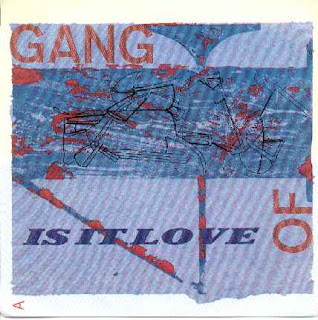 Somewhere between Solid Gold and Songs of the Free (perhaps the Another Day, Another Dollar EP), the band completed a concerted shift from the heavy, grinding funk of Solid Gold to the decidedly slicker, more chart-friendly sound of Songs of the Free.  This transformation coincided with the departure of original bassist Dave Allen, who would go on to form Shriekback with former XTC member Barry Andrews, and the arrival of new bassist Sara Lee.  Hard took this trend one step further as band leaders Andy Gill and Jon King axed drummer Hugo Burnham and replaced him with...a drum machine.

Not an auspicious start to be sure, but the remaining band and producers Ron and Howard Albert have crafted a smart dance record, not unlike the music of Martin Fry's ABC, but with the biting lyrical content one had come to expect from a Gang of Four record.  Hard is certainly over-produced at times, however the band manages to retain its edge despite the addition of strings, backing female vocals, and disco flourishes. Most importantly, Gill's trademark staccato guitar bursts remain front and center in the musical arrangements, and Lee continues to be a more than capable replacement for Allen on bass.  In short, Hard delivers a fast-moving, catchy set of songs, heavy on rhythm and groove. 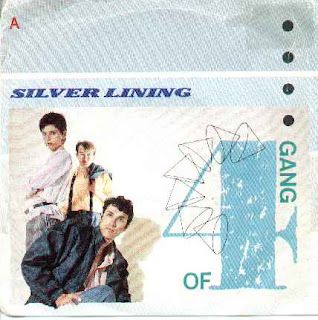 While Gill and King venture into new, perhaps unwelcome, lyrical territory with songs like the aforementioned "Is It Love," the characteristic trenchant wit of Gang of Four is present on much of the album. In particular, "A Man With a Good Car" and "Woman Town," songs which comment on commodity culture and sexual politics, respectively, hark back to the classic Gang of Four catalogue.

Hitting what would seem to be the proverbial creative dead end, the band would disband in 1984 after releasing the live album, At the Palace and a song on, of all things, the Karate Kid soundtrack.  Andy Gill and Jon King would revive the Gang of Four name for two underwhelming albums in the early '90s before the entire original band reformed in 2005.

I got wind of your blog via Jeremy's wonderful Moon In The Gutter site, and thought I'd take a gander before I leave for work. Really excellent piece on The Gang Of Four. I managed to see them play live on several occasions, and am also a fan of their Hard album. Great to see a well written appreciation. I'll link your site on my own blog when I get home tonight.

thanks for the kind words, Steve. Glad to hear there is another Go4 fan who does not despise HARD. :-) Never have been able to see them live, unfortunately. I was abroad during their '05 tour and their first run was a few years before my time. With a new album in the works, a new tour should be upcoming though.

BTW, the PERSONAL BEST post is the first one on the blog, from the middle of January.

i remember seeing the IS IT LOVE video on MTV back in the eighties. i had just graduated high school. it haunted me. the mood, and look. and those harmonics and big shoulder pads. it was'nt until years later, and i saw some rainer fassbinder films that i drew some aesthetic conclusions. anybody else spot the influence? regardless, HARD (especially the singles) hold up in my book. abrasively pastel.

I'm glad to read this too: I've always liked Hard and never understood people's hostility to it. I also like 80s RnB/Dance Pop in general, so I was never offended by them doing there take on it. Maybe people's hostility to it is that there original fan base approached them as a punk band and so were weirded out when they revealed themselves to be a fundamentally RnB band.

I think it was when I bought the Go4 CD 'A Brief History Of The 20th Century' in 1990, heard those couple of songs from HARD in the context of a compilation and realised, as you pointed out here, that it was continuing impressively in the vein of 'I Love A Man In Uniform' which I really liked in fact. They had to change, it was in their nature to want to break away from the constraints of the increasingly reactionary punk movement. I must say I'm distinctly unimpressed by the recent albums the current incarnation (only Gill left from the original group) have put out. They really ought to give it up imho. However, perhaps someone should do a piece 'In Defence of SHRINKWRAPPED', the 1995 album which is, I happen to think, also a very good and underrated LP. 'I Parade Myself'[https://www.youtube.com/watch?v=33kmoMhN_ts] is a particular highlight, as well as the title track and the haunting 'Unburden, Unbound'. Anyway, that's for another day (plus I have no blog any more!); thanks for your robust defence of HARD, well deserved :)