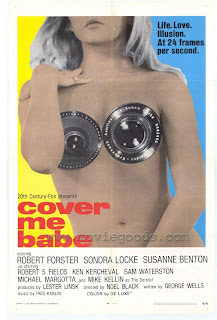 Life.  Love.  Illusion.  At 24 Frames Per Second.
With those immortal words, Cover Me Babe (or cover me babe, if we follow the poster's lead) was unleashed on the public.  Still unavailable on home video, Cover Me Babe was director Noel Black's unsuccessful follow-up to his masterful debut Pretty Poison, an achievement he was never able to match. Vincent Canby was especially scathing in his review, saying, "Although Cover Me Babe is a second feature, it looks very much like a first and had it been a novel, it probably would have stayed in somebody's trunk.  Because of the huge investments involved, even mistakes like this can't be allowed the honor of decent obscurity."
This was also one of the projects that star Robert Forster immediately signed up for after his well-received work in Haskell Wexler's towering Medium Cool.  Where Black's precipitous decline led to the likes of Private School (a suitably raunchy T & A flick, but still...), Forster would recover to make exploitation hits such as Alligator and, much later, Tarantino's Jackie Brown.
Cover Me Babe has shown up on the Encore networks in fairly recent times, but I've always managed to catch it in the middle.  Forster plays a disagreeably pretentious student filmmaker who dreams of artistic success outside of the studio system. The supporting cast includes a pre-Clint Sondra Locke, Ken Kercheval (who had appeared briefly in Pretty Poison), Mike Kellin (so good in Midnight Express), and a young Sam Waterston.
I love how the one-sheet design very tastefully covers the model's breasts with camera lenses, literally covering her while offering a play on the film terminology of "covering" or "getting coverage."  In case the watermark on the bottom isn't clear, the scan comes from Moviegoods.
Check out the opening credits:
Posted by Ned Merrill at 12:42 AM

Man,
I am going to have to start checking Encore more closely as I have wanted to see this for years...PRETTY POISON is a real favorite...

This might have been five or six years ago now, so don't kick yourself too much!