Back for More: Gang of Four's "Second Life" 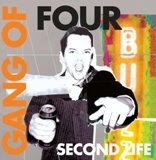 Gang of Four, the band to which this blog owes its name, has released its first new single in thirteen years, "Second Life."  Unfortunately, original drummer Hugo Burnham and bassist Dave Allen have officially left the band once again.  Although Allen was working on the new recordings with Jon King and Andy Gill, I'm not sure if he is a part of the new single.
I haven't heard the new song yet, but here's an early review from the London Mirror and a video for old time's sake:
"Is It Love," 1983:
Posted by Ned Merrill at 7:41 PM

I love Gang of Four. I wore out my cassette of "Entertainment!" from back in the day. Then I purchased the CD version. Ultimately, the album was one of the first I loaded onto iTunes.
"The worst thing in 1954 was the bikini!"

ENTERTAINMENT! is the one album I know would be on my "desert island" shortlist. Looking forward to the new full-length. Hopefully Go4 will be able to pick up and get back at it as Mission of Burma have been able to do so well in the last five years.