The Loneliness of the Long-Distance Truck Driver 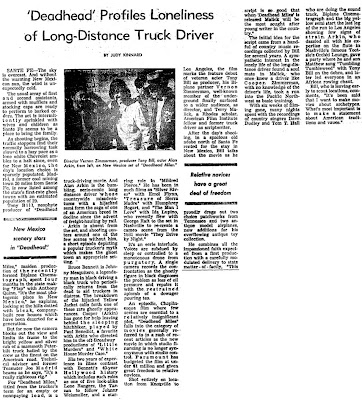 Originally slated for a 1972 release by Paramount, the film was shelved save for several film festival appearances in the 1970s and '80s, where it was already proclaimed a "missing movie" by programmers and journalists. My copy comes from an A&E broadcast from the late '80s or early '90s. 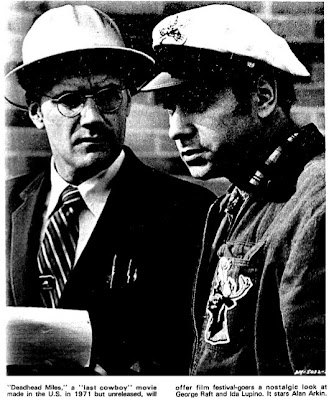 From an L.A. Times report on the La Jolla Film Festival in 1980,
which included a rare screening of Deadhead Miles.
According to a 1985 L.A. Times article on the Filmex festival that year, of which Deadhead Miles was a part of, the film was deemed "unreleasable" by the studio upon its completion. Perhaps Paramount will license the film to Olive Films who have recently scheduled a wave of previously unseen, on DVD, Paramount titles, many from the late '60s-'70s.

EDIT: The film is now available via Netflix Streaming.
Posted by Ned Merrill at 10:48 AM

Looks like Deadhead Miles is on Netflix instant now!

Yes, it is, amazingly. Check out Rupert's blog for MANY great finds on Netflix instant.

Thanks for this, I mentioned it on my Terrence Malick blog with due credit to your site. Best wishes, Paul

Thanks! I will be sure to take a look at your site.