You can't see The Outsider on DVD or VHS, but it has been streaming on Netflix Instant for awhile now.  One of a number of not-on-DVD Paramount titles that have shown up on the service, I found it to be very effective and disturbing...it certainly deserves to be more widely known than it is.  Craig Wasson stars as a disaffected Irish-American Vietnam veteran who takes his soldiering skills to Northern Ireland and the IRA, in order to fight for a cause he actually believes in.  What he finds, not too surprisingly, is that even his very noble and pure intentions cannot protect him from the in-fighting, politicking, and corruption that are part and parcel of these situations.  The film was written and directed by Tony Luraschi from Colin Leinster's novel The Heritage of Michael Flaherty.  Based on the complex nature of the film and the skill with which it was made, it's surprising it was directed by a neophyte and equally surprising that it remains his only film.  Sterling Hayden co-stars in a small, but important role as the grandfather, an ex-IRA man, who inspires his grandson's journey.

I find that Wasson gets a lot of unwarranted flack from fellow cinephiles--mostly for Body Double, I believe--but there's no denying that he picked a lot of challenging, left-of-center projects during his few peak years as a young supporting player and leading man, Go Tell the Spartans, Four Friends, and Carny among them, which is something he should be lauded for more than he is.  That none of these films were successful in a financial sense is not attributable to the presence of Wasson, but to their inherently uncommercial nature, particularly in the changing, post-blockbuster climate of the late '70s and early '80s.

And, yes, it appears that the Paramount marketing department re-used the font from the previous year's The Warriors for The Outsider, or something close to it anyway. 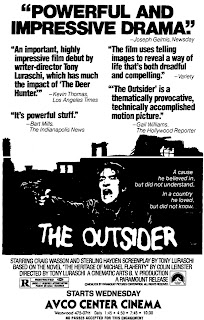 color me intrigued! i've got to get around to seeing this film...i mayve missed my chance to catch it streaming on netflix. I can't comment on this particular picture, but i do know one of wasson's former agents who says he was considered very talented but practically clinically insane. Perhaps this is what derailed what i agree was a once promising career. I find his perf in BODY DOUBLE to be played smartly affected. He is playing someone who is PLAYING masculine/cool. His character can be read as a flaccid penis, desperately trying to wear leather chaps and play the part of a cool actor and a cool boyfriend and a good lover. It is not until he stumbles upon the Frankie goes to Hollywood club w/ Holly Body that his character's anxieties about performance are liberated and he can really step into the role of sleazeball with full abandon and final success. An underrated guy, no doubt~