Formed when Filmways, Inc. purchased Samuel Z. Arkoff's American International Pictures (AIP) in 1979, Filmways Pictures released several films of note before it went into bankruptcy and was absorbed by Orion Pictures in 1981.

This rare first Filmways logo comes from the beginning of the Dressed to Kill letterboxed laserdisc issued in '93 by Image.  The DVD and Blu-ray replace this logo with MGM and Orion logos.  Dressed to Kill was probably the company's most successful film in terms of box office and critical reception, in addition to the controversy and word-of-mouth that it generated.  De Palma's expensive follow-up, Blow Out, while recognized now as one of his finest achievements, was a big money loser in the Summer of '81 and a crushing blow to the company's survival.  Based on the unscientific IMDb numbers, Death Wish II, released in early '82, was likely the company's only other box office winner.  Other worthwhile titles in the Filmways stable included Arthur Penn's Four Friends, the cult classic post-punk concert film Urgh! A Music War, The First Deadly Sin (Sinatra's last starring role), and the final film to go out with the Filmways imprimatur, Summer Lovers.  Most of these films appear on DVD with newer Orion logos rather than the Filmways logos that were originally attached.

I have not seen the above logo on a DVD or Blu-ray, but if someone has I would be interested to hear about it. 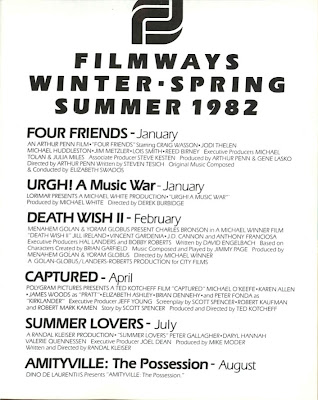 Judging by this industry ad, things could have been much different for film history, if Filmways had stayed afloat a little longer. 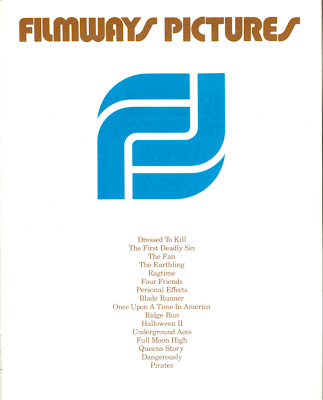 Since I've been film-obsessed since grade school, I vaguely remember when Filmways first absorbed AIP back in the early '80's. I would eagerly watch Rona Barrett's industry gossip reports on "GOOD MORNING AMERICA" and learn all the insider scuttlebutt. Specifically to this, I remember when she reported Filmways founder Martin Ransohoff wanted to merge/sell his company with Columbia Pictures, but it fell apart because he had an ongoing beef with producer Ray Stark, who had an output deal there at the time, and the AIP buyout came soon after. Obviously, Ransohoff did wind up doing some movies with Columbia later, though most I believe occurred during the reign of David Puttnam, who also ran afoul of Stark and wound up getting sent packing because Stark started sabotaging potential projects. Not that Ransohoff was any calmer of a customer either; as I recall, he dumped a lot of inherited AIP films (FULL MOON HIGH, GORP, sold THE VISITOR to smaller distrib International Picture Show) because he wanted Filmways to be a "classier" studio.

Another irony is that a lot of the movies you mention were released by Filmways no longer belong to their inheritor Orion/MGM. URGH was a service deal from Lorimar, SPLIT IMAGE was a Polygram production, and FIRST DEADLY SIN reverted to Frank Sinatra's estate. Even DEATH WISH II had its TV rights pre-sold to Viacom by the Cannon Group before Filmways picked it up for theatrical play.

The other Filmways story that kinda amuses me is that soon after the AIP buyout, they lured away "SCOOBY-DOO" creators Ken Ruby and Joe Spears from Hanna-Barbera to start their own animation house to compete with HB. They started off strong enough by getting DC's Plastic Man character (who had previously appeared in the first incarnation of the RS-supervised HB "SUPERFRIENDS" cartoons), and got the contract to create an animated "MORK AND MINDY" Saturday morning toon for Paramount. But when Filmways got bought by Orion, they dumped the Ruby-Spears studio and sold it to Taft Broadcasting...who just happened to own Hanna-Barbera...the behemoth the poor guys had been trying to escape from in the first place!

As usual, you provide us with some fascinating, heretofore mostly unknown pertinent facts on the subject at hand.

It's interesting that URGH! didn't go out through UA or Paramount since they seemed to be releasing most of the Lorimar product at the time. I've missed URGH! when it played on 35mm in the last decade or so. Does that print(s) have the Filmways logo at the front? I would imagine so.

Ransohoff did produce some fine films over the years--THE WANDERERS (Orion), THE WHITE DAWN (Paramount), and AMERICAN POP (Columbia) being particular favorites of mine.