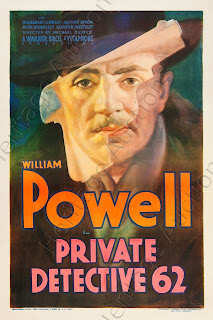 While there are no stone classics in the Warner Archive's new William Powell at Warner Bros., it's a package that still manages to deliver a fair share of pleasures for fans of Powell, the pre-Code years, and the great supporting players of the early '30s Warner Bros. stable.  Powell was at Warner from '31 to '34 and made only 9 films at the studio.  This set collects 4: Alfred E. Green's The Road to Singapore, Mervyn LeRoy's High Pressure, Michael Curtiz' Private Detective 62, and Curtiz' The Key.  With this set, WAC has brought all of Powell's films made under contract at WB to DVD.

Journeyman director Green helmed over a 100 films from the teens to the '50s, none probably more potent than Baby Face, which may be the prototypical pre-Code film.  The Road to Singapore (1931) is decidedly more by-the-numbers, right down to the canned tribal drumbeat that can be heard in the background in so many jungle-set dramas of the period.  Here, Powell is a wealthy playboy who has scandalized his fellow Brit expats on a South Pacific isle by reveling in constant drink and debauchery.  He has a reputation as a home-wrecker, which he lives up to when he romances doctor's wife Doris Kenyon.  Her stiff husband is played by Louis Calhern, no stranger to snobbish, dastardly types, but usually they're a little smarter and more fun to watch than here.  As Calhern's barely legal sister, Marian Marsh has some good moments, as she deliberately tweaks her brother by flirting with Powell, and I found her more interesting than star Kenyon.  Even here, in this relatively early vehicle, Powell displays the seemingly effortless charm and debonair qualities that made him famous in the years to come, so much so that it makes it almost impossible to believe he would be so despised by those around him.  I count myself a fan of jungle-set films, particularly of this era, so the milieu alone makes the film worthwhile, but it in no way eclipses the likes of King Kong, The Most Dangerous Game, White Woman (oh, how I wish this would appear on DVD!), Bird of Paradise, Safe in Hell,  Kongo, The Letter, or Red Dust.

Before I leave The Road to Singapore, I must mention a particularly impressive, elaborate series of 3 shots, that occur about halfway through the film, as Powell and Kenyon stare out the windows of their homes in the general direction of the other.  It's a quiet scene, except for night sounds and the aforementioned drumbeat, and features what looks like a model of the island, but the edits are made discreetly to make it appear that the camera has traveled from one side of the island to other in one shot. 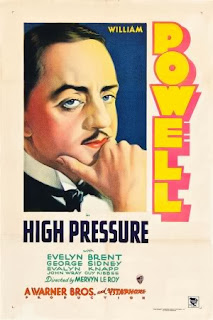 LeRoy's High Pressure (1932) is reminiscent of other Depression-conscious comedies made at the studio at the time, usually starring one James Francis Cagney.  In the Cagney role is Powell as a conman "promoter" prone to weekend-long benders after telling his girl (Evelyn Brent) he's only going out  for some Bromo-Seltzer and will be right back.  It's during one of these all-nighters that we meet Powell and it's quite a shock to see the suave Powell passed out and drunk as a skunk with a several days old beard.  He's rescued from this state by his pal (the ever-amazing Frank McHugh) and given a new client in George Sidney as a shyster Jew who is nothing in that category compared to Powell.  Sidney claims to have a formula from a scientist friend that can turn sewage into rubber for tires.  There's much of that wonderful, only-in-pre-Codes ethnic humor, which manages to be pretty equal opportunity for the most part and never really nasty (except perhaps when it comes to island natives; see: The Road to Singapore).  Brent is lacking in charm and spunk and it's hard to see why Powell falls to pieces whenever she walks out on him.  So often I find myself enchanted by the women in pre-Code films, particularly those who seem to have disappeared from screens by the end of the '30s (which seems to be most of these actresses save for Stanwyck, Davis, Crawford, and Colbert), but that wasn't the case for me with most of the female co-stars in these films, particularly Brent in High Pressure.

Nothing here screams "classic" or "great," but I did find myself laughing pretty hard at Sidney's scenes, and a couple of moments that reach a certain level of wackiness and inappropriateness that borders on transgressive:
a) one of Powell's particularly animated salesmen nervously shakes his thighs as he works the phone; two young boys visiting the office, accidentally sit on his leg--which acts like a vibrating bed--and derive maybe a little too much pleasure from the experience.
b) the moment when the "mad scientist" (Harry Beresford) Powell and Sidney have been searching for reveals himself to be truly nuts. 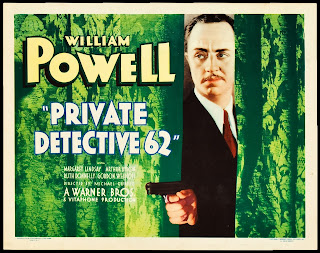 Private Detective 62 (1933) may be my favorite of this bunch.  It's one of those tightly paced, sub-70 minute films, where "a lot" has happened and you're shocked to find that only 20 minutes have elapsed.  Powell is a government secret agent abandoned in France by his superiors when his mission fails.  Through derring-do and quick thinking, Powell finds himself free (he's aptly named Free) from the French and partnered up in a private detective firm with Arthur Hohl, fast becoming one of my favorite of the Warner character players of this era.  Margaret Lindsay, as a socialite who keeps winning big money at gangster Gordon Wescott's casino, much to his chagrin, is Powell's best female screen partner in this collection (and probably his best at WB after Kay Francis).  This film is the most ideal fit for Powell's persona and skills in this box set and it comes highly recommended.  For those, like me, who find themselves tallying those elements in a pre-Code film that would soon be outlawed by the Production Code, look no further than James Bell's "Whitey," referred to in the film as a "snowbird" and "hop head" and told at one point to stay off the "white stuff" or something to that effect. 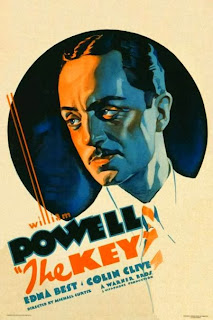 Curtiz' The Key (1934) is right behind Private Detective 62 in order of preference for me, even though I think Powell is probably miscast here and almost appears to be in a different film from his British costars Colin Clive and Edna Best.  Clive is, of course, best known for his histrionic performances in the James Whale's Frankenstein films, but I'm most impressed by his work here and in Whale's hard-to-find One More River.  This is mostly a serious, provocative drama about British military efforts (of which Powell and Clive are a part) to put down Sinn Fein insurgents in 1920 Dublin; Powell and Clive also happen to love the same woman--Clive's wife (Best).  Clive and Best's scenes have a weightiness and emotional intensity that is ineffectively contrasted by Powell's lightheartedness and devil may care attitude, out of place in the face of all this bloodshed and uprising.  It's perfectly suited for material like High Pressure, but not this.  I don't know that anyone would think of Powell as a soldier of fortune, but that's what he is here.  So, The Key is something of a schizophrenic film, the part with the star (Powell) is ill-conceived, but the stuff with his co-stars is really quite potent, particularly for those viewers who enjoyed the deeply felt drama of Wellman's Other Men's Women, for instance.  As for WB contract players here, Hobart Cavanaugh is highly billed, but under utilized.


We get trailers and perfectly watchable prints on these discs.  Like many heretofore hard-to-track-down movies that have been "rescued" by the Warner Archive, they look particularly fine when compared to those ropey copies that floated around for years beforehand.