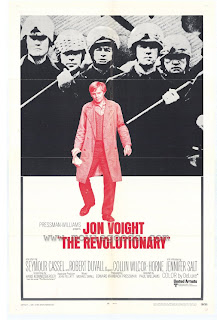 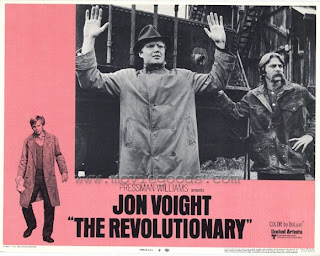 Voight concedes that he will never look as badass as Cassel. 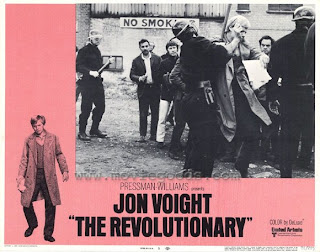 "Get your hands off me, Pig!"
Before he was stumping for McCain and calling the Vietnam-era anti-war movement "Marxist propaganda," Jon Voight was starring as the eponymous hero of Paul Williams' The Revolutionary. Made just after Voight's break-out film Midnight Cowboy, The Revolutionary is set in an unnamed Facist-like state (shot in a cold and anonymous London). Voight, a member of a radical student organization akin to SDS, becomes disillusioned with the group's ineffective, non-violent attempts to enact change.  He leaves his young cronies behind and becomes allied with labor leader Robert Duvall and Weatherman-type extremist Seymour Cassel, who in today's climate, would in no uncertain terms be labeled a terrorist.  The film is perhaps too rigidly composed and structured and I have mixed feelings about its ambiguous ending, which Williams designed as a way to "throw the choice back to the audience."  Even in its attempts to relocate the film out of the then-current and familiar environs, The Revolutionary is a striking document of the times in which it was made.  Towards its later stages, the film reminds of the much more recent Day Night Day Night, a film that explores the motives of a would-be young terrorist in post-9/11 New York.
Jay Cocks called the film "a subtle, intelligent" film that "charts the course of radicalization with cool precision."  Of Voight, he said the actor's "fine performance" was his "best to date."  It was young director Williams whom Cocks singled out for the most effusive praise: "It is with filmmakers like Paul Williams that the future of the industry lies.  Williams has talent and insights far beyond his 26 years.  [The Revolutionary] marks Williams as a filmmaker not only worth watching, but also worth waiting for."  As we will see, Williams was at the forefront of the New Hollywood, but it would be others who would gain fame and direct the most important films of the era.
Williams would direct three very interesting and promising features (Out of It, The Revolutionary, Dealing: Or the Berkeley-to-Boston Forty-Brick Lost-Bag Blues) in quick succession in the late 1960s and 70s before leaving Hollywood for the Arica Cult.  He would return to direct Nunzio in 1978, Miss Right in '82, and a few other films in the '90s and early '00s, but he never recaptured the momentum he'd had early on or deliver on the promise seen by critics like Cocks.
Before leaving the industry, Williams formed a production company with Ed Pressman (Pressman-Williams), which would produce Brian DePalma's Sisters and Terrence Malick's Badlands.  Pressman continues to be a prominent producer, even having a retrospective of his work several years ago at the Brooklyn Academy of Music.  While most of Williams' peers have gone onto become lionized figures, he has drifted into obscurity and been confused with the other Paul Williams.
Not surprisingly, none of the early Williams pictures has appeared on DVD preventing a wider reconsideration of his work.  Dealing is a Warner title while Out of It (also starring Voight) and The Revolutionary are both controlled by MGM.  WB has not previously partnered with Criterion on DVD while MGM has on the rare occasion, but should that situation change, the above three titles would be ideal for an Eclipse box-set.
When I programmed The Revolutionary a few years ago (along with Electra Glide in Blue, another United Artists title of the era), I was very happily surprised to see both in pristine, new 35mm prints.  I'm told that this was thanks to the efforts of esteemed MGM/UA archivist John Kirk and that these and other scarcely seen UA titles were part of a cable package on Flix several years ago.  Clearly, the elements are ready, but MGM/Fox has not shown interest in releasing DVDs of these films--MGM did, thankfully, release Electra Glide in Blue several years ago before the Sony buyout.  [On a much sadder note, in its monthly newsletter, the Film Noir Foundation reports that John Kirk is gravely ill with a brain virus and does not have much longer to live.]
Voight must, deep down, feel some relief that The Revolutionary, a cinematic reminder of his youthful political leanings remains in the vaults.  However, for admirers of the American cinema of the late 1960s and 70s, it and the other films of the Paul Williams oeuvre are vital pieces of that puzzle and should be more readily available for viewing.
As for the poster design, it's always struck me that Voight is made to appear like a puppet on a string.  His character has a limp in the film, which, I think, accounts for the his bowlegged, wobbly appearance in the poster.  We will also, of course, get the impression of a man beaten down (the limp comes at the expense of the police) by an oppressive higher power (the police above and behind him).  All the more reason for star Voight to sneer at the film, one he must consider a youthful folly at best.
Posted by Ned Merrill at 1:26 PM

Voight, Duvall and Cassel all in the same film? Yowza. This sounds really interesting. I have never heard of this film or the filmmaker - Williams. Sounds intriguing though.

As for Criterion dealing with MGM... didn't they own HOUSE OF GAMES? I know, Criterion gave that a pretty spiffy release.

The film is very interesting and is ripe for rediscovery. You're right about HOUSE OF GAMES and I've edited the article accordingly.

Can Mr. Obscure One-Sheet please contact me at registration (at) readbw.com? I'm considering purchasing the Revolutionary and Dealing from http://www.subcin.com/subvid.html, and wonder if has any thoughts on this guy's reputation, as far as the quality of his wares, or any recommendations for another dealer in "rare" DVDs.

Hi! How could I watch or download this movie? Thank you