"They called it God's Country...until all hell broke loose!" 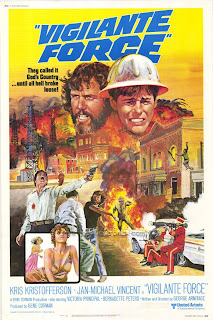 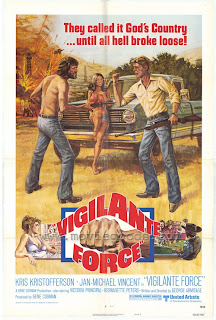 Style B
I've been meaning to track Vigilante Force down since I picked up the Style A one-sheet at a poster sale at the Orpheum in Madison, WI about nine years ago.  Directed by Tarantino favorite George Armitage (Miami Blues, Grosse Pointe Blank), this Phenix City Story-influenced actioner has yet to appear on home video in any format.  Top-billed Kris Kristofferson (looking amusingly scraggly in a cop uniform) and Jan-Michael Vincent star as the brothers Arnold who start out on the same side and end up as foes.  It seems that Ben Arnold's (Vincent) small town is being overrun by a group of violent oil workers.  Naturally, Ben calls in his Vietnam-veteran brother Aaron (Kristofferson) to help quell the disorder. Aaron hires a group of mercenaries to put down the trouble makers, but it's not long before Aaron and his gang become corrupted by their newfound authority, setting the stage for a confrontation between the brothers, vigilante force vs. law and order. 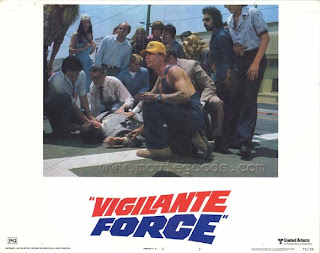 Met with unsurprisingly tepid reviews, the film was also, surprisingly, a flop according to Michael Weldon's Psychotronic Video Guide. Made in a golden age of revenge pics and boasting Kristofferson and Vincent when their respective stars shone the brightest, Vigilante Force would seem to be right in line with Walking Tall, White Line Fever (also with Vincent), Dirty Harry, Fighting Mad, and the other urban Westerns that proliferated on drive-in screens throughout the early part of the decade. This was one of the earliest motion pictures to prominently feature a Vietnam veteran and it must be noted that that character, Kristofferson, is the "bad brother" and his hairy, frequently shirtless appearance is starkly contrasted by his clean-cut "good" brother Vincent.  Not having seen the film, it's hard to know what political statement, if any, is being made by Kristofferson's characterization.
The film features a rare feature film appearance by Victoria Principal before her Dallas days and Bernadette Peters in one of her earliest roles.  It should also be mentioned that the film was produced by Gene Corman, brother of Roger.
Director Armitage is anything but prolific, but several of his films--Hit Man, Miami Blues, Grosse Pointe Blanke--have left their mark, particularly on the aforementioned Tarantino, who talks enthusiastically about the audacious--and long lost--movie marketing of his youth and Armitage in a rambling and entertaining interview on Elvis Mitchell's The Treatment. 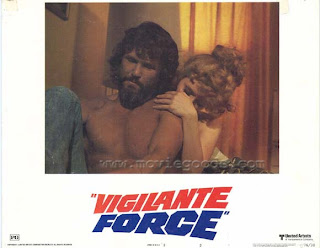 Vigilante Force features two distinctive poster ad campaigns, which can be seen here in their one-sheet incarnations.  Like many films of the era, particularly exploitation and genre pieces, Vigilante Force's key art is bold and colorful, and based on a drawing or painting rather than photography.  Although the Style A poster foreshadows the "big head syndrome" that would plague film posters and video artwork from the mid-1980s onward, it also includes a spectacular collage, in this case emphasizing the action set pieces of the film. The collage style was very prevalent in the 1970s.  Three of my favorites in this vein are Electra Glide in Blue, Cleopatra Jones and the Casino of Gold, and Duck, You Sucker.  Style B isn't quite as flashy--perhaps this is why it's not the first string poster--but it effectively gets to the heart of the piece...brother against brother, with a woman in the middle, of course.
After looking at these posters or books such as Trash: The Graphic Genius of Xploitation Posters and Film Posters of the 60s, it's hard not to become at least a little depressed when looking at the latest batch of bland, colorless film posters and DVD covers. While it's true that the film's the thing, some semblance of film artwork surely couldn't hurt.
Posted by Ned Merrill at 11:46 AM

Another excellent article! George Armitage is such an underrated filmmaker. It's just a shame that he doesn't make more films. I think that MIAMI BLUES is probably my fave film of his and features such solid performances from Alec Baldwin, Jennifer Jason Leigh and, my fave, Fred Ward (also underrated).

I wonder why Armitage has directed so few films over such a long period of time. It would seem logical that Armitage might have had some personality issues or creative differences with executives and producers over the years, making it difficult for him to work regularly. Purely speculation on my part.

Floyd Mutrux is another filmmaker from this era who has had his hand in a few significant films and a lot of others that have remained in "development hell" for one reason or another.

In regards to Armitage, you're probably right. Maybe he just doesn't like having to make compromises with the studios who have no idea how to make a good film and he just doesn't like to fight it out with them, instead picking the projects that he connects with in a personal way?

Alas, so little has been written about him. I lump in with John Flynn as another fascinating filmmaker with a small but vital filmography that is often marginalized.

Funny you should mention Flynn--I agree with the comparison and was already planning an article on one or more of his films.

That's awesome! I love THE OUTFIT which is such an underrated gem. I can't find ANY info on it anywhere. Now, THAT film could do with a proper DVD release.

You are absolutely right on about THE OUTFIT. More Joe Don Baker can only make the world a better place.

Definitely. Joe Don was pretty kick-ass in that one. He and Robert Duvall had great chemistry together. Altho, nothing will beat the surreal bad-ness of MITCHELL.

happened to see this lost treasure in beautiful high def before the tragic day [1/20/09] when cablevision did away with many of their high def channels [my own personal black tuesday]. where else can u see brother vs. brother battle it out in an amazing finally complete with band uniforms, coonskin hats, broken tractors, parades as a cover, dyanamite aplenty, and a bazooka. my friend, akim, the terrible, turned me onto ioffers which has this nugget currently available in dvd-r. if u haven't seen it, you're missing the "godfather" of drive-in action movies.

Thanks for your comment. Had no idea this one was circulating on the HD channels. I'm a Comcast subscriber and haven't seen this one on any of the HD channels I get (MGM HD would be a good bet since is a UA title). Sorry to hear that Cablevision pulled the plug. I've looked at ioffer before and there are many titles there that I've put on my "wish list."