"Nosferatu. Vampire! First I will save your soul, then I will destroy you."

What's most impressive about this "little" film in the Romero canon is the attention and care that the director gives to the blue collar milieu of the film. Braddock, PA, the main location of the film, is the most vital member of the cast, next to John Amplas' Martin. More than the horror aspects of this film, I am struck by the sensitivity with which Romero depicts the mundane, unrewarding lives of the working class supporting players, particularly the lonely wife who Martin briefly finds solace with. Romero's "living dead" films get most of the ink and I love a couple of them dearly, but Martin is probably his most mature and affecting film.
Braddock is the subject of several documentaries by frequent Romero collaborator and native son Tony Buba. 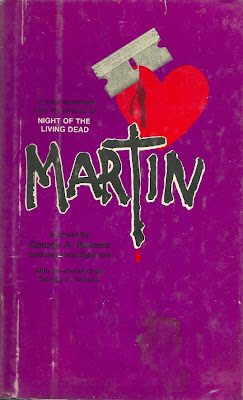 Pictured on the back: John Amplas, as Martin, gives one of the best lead performances in any Romero movie and Lincoln Maazel, father of noted conductor Lorin, is pitch perfect as Tata Cuda in his one and only film appearance. 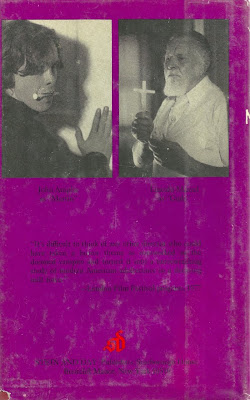 fantastic! One of my top 2 or 3 favorite Romero films!

Yes! This is a great film and so underrated, even among Romero fans. Of course, this is coming from someone who thinks very highly of Romero's version of THE CRAZIES.

As for MARTIN, it really is quite a fantastic film and if I'm not mistaken, wasn't it the first time Romero teamed up with Tom Savini? I forget.

I think it's time for another list on your site...favorite Romero films.

Believe it or not, never did see THE CRAZIES. I actually read a solid review of the remake, which rated it better than Romero's original. I believe you are correct that MARTIN was the first Romero / Savini team-up. Another of my favorite underrated Romero films is KNIGHTRIDERS. My knowledge of his later career oeuvre is much more limited although I did see DIARY OF THE DEAD.

Yeah, I really wanna see THE CRAZIES remake as I've heard a lot of praise for it plus it stars Radha Mitchell which is always a good thing.

Ah, KNIGHTRIDERS! I think that may in fact be Romero's most underappreciated film and maybe most misunderstood. I've only seen it once but quite enjoyed it - a nice change of scenery for Romero and co. as they got away from the horror genre for a film.

As for later films, I've seen DIARY OF THE DEAD which I quite enjoyed and I've appreciated the more times I've seen. But I think LAND OF THE DEAD is my fave of recent stuff as it has an almost has a John Carpenter-esque feel at times.

I guess I really have to see LAND OF THE DEAD already. I was mixed on DIARY. I'm not one of those in the pro DAY OF THE DEAD camp.

I do like DAY OF THE DEAD even if its not the version that Romero wanted to make. I know he's said that LAND OF THE DEAD is much closer to his original conception for DAY so maybe that's why I like it more.