"A shadow shall fall over the universe and evil will grow in its path..." 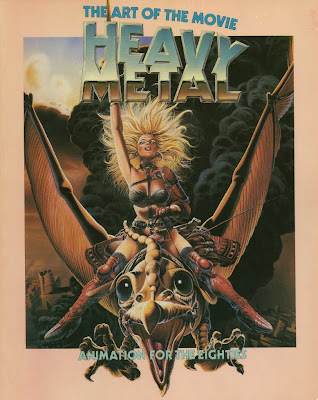 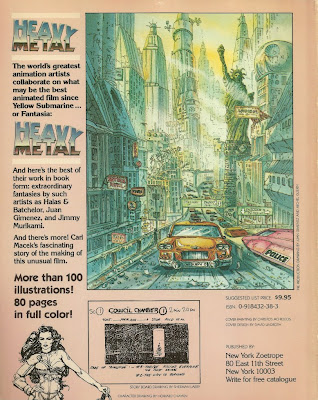 As I continue to give my new printer / scanner / copier a workout, I bring you the front and back covers of Carl Macek's The Art of Heavy Metal. I searched high and low for this book for nearly five years in my quest to collect as much as I could from Heavy Metal: The Movie. I finally located a good condition soft cover edition of the 1981 book at a Chiller Theatre convention where I spent several minutes chatting with Heavy Metal publisher and Teenage Mutant Ninja Turtle co-creator Kevin Eastman about the magazine and the film and what he was doing to get it re-released in theaters and on legitimate home video. Our scintillating conversation was broken up by his wife, the truly statuesque and buxom pin-up model and actress Julie Strain, who insisted to Kevin that it was time to hit the road. Julie would later star in the Eastman-produced Heavy Metal: F.A.K.K.2, which I still have not seen, before divorcing Eastman several years later--a sad day for comic geeks everywhere.
The film was finally released to VHS and laserdisc in 1996, at which point most of the mystique around the film dissipated. A one-sheet from the '96 re-release makes an appearance in John C. Reilly's bedroom (or was it Will Ferrell's?) in Stepbrothers.
My love for this film has waned over the years as I've gotten older and more discerning, but it had a certain appeal for a teenaged cult movie enthusiast beyond the abundance of bare breasts and over-the-top early '80s hard rock (often of the "so bad it's good" quality). For me, one of the biggest draws was that it was unavailable on home video for so long. Macek's exhaustive book offered hundreds of high quality film stills and sketches allowing one to really appreciate the great artwork contained in the film, which was badly degraded on the second and third generation bootlegs tapes (from premium cable airings) sold at comic and sci-fi conventions around the country.
The Art of Heavy Metal was reprinted and expanded in 1996 by Kitchen Sink Press, but the quality of the images was much lower than in the original printing so if you must have one, eschew the extra chapter on the cult appeal of Heavy Metal and buy the 1981 version, which can be found easily and cheaply on ABE Books.
Beyond the striking original artwork, design, and stories by the likes of Richard Corben, Juan Gimenez, Bernie Wrightson, Jimmy Murakami, Chris Achilleos (whose artwork adorns the book cover and most other Heavy Metal paraphernilia), Dan O'Bannon, Angus McKie, Mike Ploog, Howard Chaykin, and Alex Tavoularis, perhaps the film's best virtue is the phenomenal score by maestro Elmer Bernstein...a monumental void was filled when Film Score Monthly released the complete score on CD in 2008: 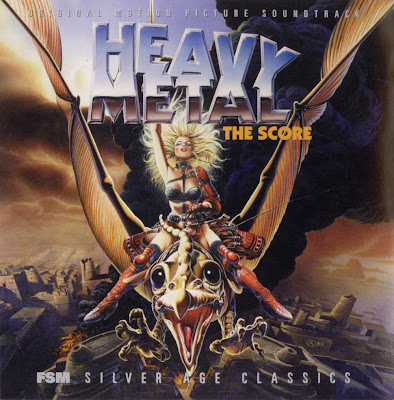 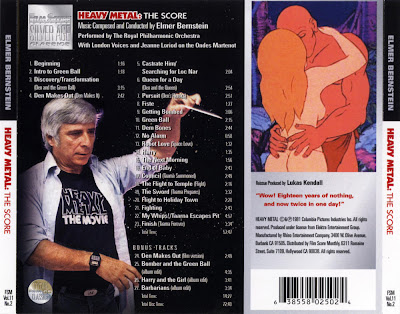 Some of the best praise I've ever seen heaped on a film, credited on the back of the laserdisc to the Los Angeles Times (Kevin Thomas?). For some strange reason this quote wasn't reused for the DVD or VHS:

Ah, I have fond memories of being very eager to watch this film as an impressionable youth with the promise of animate boobies and ultra-violence - and HEAVY METAL did not disappoint. Every so often it pops on TV and watching it always takes me back to when I first saw it. The film actually holds up surprisingly well and seems like such an oddity as very few R rated animated films are ever made.

I am intrigued by David Fincher's recent attempts to get another HEAVY METAL off the ground. Could be good.

It does hold up well, I agree, and it's definitely a cinematic oddity in that it's an R-rated animated film not made by Ralph Bakshi. Years ago, when I was a young high school student, I got in an argument with a clerk at Kim's Video in NY who insisted that HEAVY METAL was a Bakshi film. I told him, "No, you must be getting it confused with HEAVY TRAFFIC," but he wasn't having it. Kim's was one place in NYC where you could find just about anything even if it wasn't legitimately available on home video.

Again, even though it's great to have many of these films on pristine DVDs and Blu-rays nowadays, I do somewhat miss those days when it was a major thrill just to be able to locate a copy of HEAVY METAL and watch it, even if it was by way of a blurry VHS.

BTW, from what I understand, the Fincher HEAVY METAL project has been scrapped by the studio, Paramount?, unfortunately.

Yeah, Fincher is shopping the project around to other studios and does have James Cameron on board to direct a segment which, considering the phenomenonal success of AVATAR, will no doubt have the studios falling all over themselves to give it a chance. At least, one could hope.

I do share you love of sometimes watching a film on an old scratchy video tape... kinda like hearing the pops and hiss on old vinyl recording.... That's funny about the HEAVY METAL/HEAVY TRAFFIC mix-up. An easy mistake to make I suppose altho, you would expect more from the folks at Kim's. I have fond memories of haunting their basement location near the Angelika. Great store!

"Julie would later star in the Eastman-produced Heavy Metal: F.A.K.K.2, which I still have not seen, before divorcing Eastman several years later--a sad day for comic geeks everywhere."


Lucky for you you haven't seen that second movie.

She was the one black spot on 90's "Heavy Metal" magazine.