Trailer Not on the DVD: Heavy Metal (1981, Gerald Potterton) 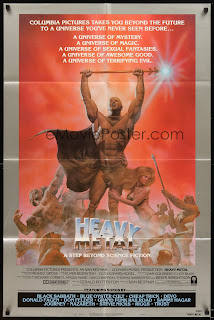 The original 1981 red band trailer has recently been uploaded to TCM's site to coincide with an airing on the channel, I would imagine.  It's voiced by the great Percy Rodrigues and has some eye-catching early '80s, post-Superman title graphics and animations.  I just love the way Rodrigues says "Heavy.  Metal."  It's a shame Sony wouldn't--or couldn't--put this on the Blu-ray in HD.

The only other trailer I've seen for the film, which appeared on VHS cassettes of American Pop and can now be seen on YouTube, is from the 1996 theatrical reissue and home video debut marketing campaign, i.e. "Louder and Nastier Than Ever!".

This one really earns its red band as you will see...


Here's a trailer for a forthcoming retrospective doc, Heavy Metal Revisited, which looks very impressive and which is, most appropriately, produced for CTV by Montreal-based Bunbury Films.  Heavy Metal was, of course, a production of Canadian Ivan Reitman and its production offices were based in Montreal.
Posted by Ned Merrill at 10:41 PM